The Future of 'Scooby-Doo' 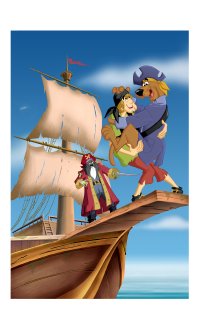 Given the sheer number of "Scooby-Doo" episodes, films, and videos, it seems there might be nowhere to take the franchise. But don't worry: As the current standout property in the Hanna-Barbera archive, there will always be more Scooby.

The cliffhanger ending to the final episode of season one of "Shaggy & Scooby-Doo Get A Clue!" certainly offers evidence that a second season is being planned. "We would love to make more," said Eric Radomski, supervising producer. But those within Warner Bros. indicate that an effort is being made to push Scooby-Doo further into the realm of high tech.

Just imagine Scooby-Doo announcing that your cell phone is ringing. Or think about Scooby adventures showing up on your iPod. Scooby-related video games have, of course, been on the market for years, and there is every reason to believe that more are forthcoming.

Why is it that Scooby-Doo was such and instant hit when he debuted in 1969 and has continued to be one of the most endearing characters in the history of animation? A lot of it may have to do with his uniqueness -- there just isn't any other character quite like Scooby-Doo, who has truly human qualities but remains at all times a lovable dog.

Or maybe it is his timelessness. The Scooby of nearly 40 years ago is essentially the same Scooby today. Such is also the case with the members of Mystery, Inc., particularly Shaggy. No matter what our age, we have all, at one time or another, known a Shaggy.

When they created a talking Great Dane named Scooby-Doo all those years ago, they started a franchise -- and broke the mold.

Michael Mallory is an internationally recognized authority on animation and the author of the book Hanna-Barbera Cartoons. He has written more than 300 articles on animation.