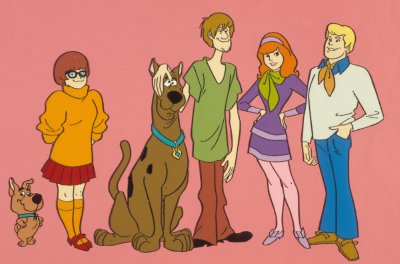 SCOOBY-DOO and all related characters and elements are trademarks of and copyright Hanna-Barbera. Mystery, Inc. [from left to right]: Scrappy-Doo, Velma, Scooby-Doo, Shaggy, Daphne, and Fred.

The primary characters from the original series, "Scooby-Doo, Where Are You!," are known collectively as "Mystery, Inc." They have remained remarkably intact over the past four decades, although there have been a few notable additions to the core company. Here's a look at each "Scooby-Doo" character:

Jovial and fun-loving, and just human enough to be understood, Scooby-Doo is by nature a chicken-heart. When pressed, however, he always comes through with a sense of whimsical bravery. If this Great Dane cannot run away from a villain, he will try to trick him or her by using an outrageous disguise. Perhaps his most pronounced characteristic is his passion for "Scooby Snacks," or just about any other kind of food.

Norville "Shaggy" Rogers is Scooby-Doo's closest friend. A carefree, beatnik-ish teenager, Shaggy shares Scooby's cowardliness, his whimsy, and his ravenous appetite. In the long run, he can always be counted on to overcome his fear and confront danger with a hearty cry of "Zoinks!"

Handsome, blond, stalwart, and a bit square, Fred is ostensibly the leader of Mystery, Inc., and the gang's anchor, striving at all times to keep everyone focused on the latest task. He is also the biggest skeptic about ghosts and monsters, and he is always searching for a natural explanation to the seemingly supernatural goings-on.

Short, bespectacled, and tomboyish, Velma is the brains of the Scooby gang. More often than not, she puts clue-and-clue together to come up with a solution to the mystery. Because of her bookish nature, Velma is a veritable font of knowledge, though her youthful innocence is best reflected by her favorite expression, "Jinkies!"

"Danger-prone Daphne" has a knack for falling into trouble and requiring rescue. A beauty queen-type and fashion plate, Daphne comes from a wealthy family -- in fact, it is her father's money that outfits the gang with such equipment as the Mystery Machine, the 1960s-era hippie van that provides Scooby and company their transportation.

If one were to shrink down Scooby-Doo physically and inject him with a double-dose of courage and feistiness, the end result would be Scrappy-Doo, Scooby's diminutive nephew. Whereas Scooby tries to run away from danger as rapidly as possible, the impetuous Scrappy dives into it headlong.

Scooby's country cousin is not the smartest pup in the litter, but he is an endearing character. A near-double for Scooby-Doo, despite his buck teeth and pork-pie hat, Scooby-Dum dog-speaks with a thick southern drawl.

Take one part Bond villain and one part Dr. Strangelove, add a bionic hand and a very bad toupee, and you have Dr. Phineus Phibes, the gang's primary nemesis in "Shaggy & Scooby Get A Clue!" His efforts to take over the world with the help of a scientific formula developed by Shaggy's uncle are constantly thwarted not only by Shaggy and Scooby, but by the complete incompetence of his henchmen.

Robi is the robotic butler invented by Shaggy's Uncle Albert to work in his mansion. While very well-meaning, Robi is a real klutz who insists upon calling Scooby "Ruby-Roo," since that is the best he can translate from Great Danish.

"Scooby-Doo" is a fascinating combination of traditional and cutting-edge production methods. In the next section, we explain how they do "Scooby-Doo."