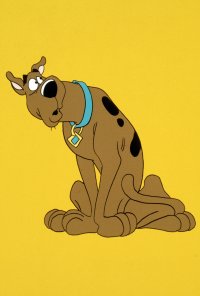 SCOOBY-DOO and all related characters and elements are trademarks of and copyright Scooby-Doo's design was a challenge for the original animators.

As was the case with all television animation in the late 1960s, "Scooby-Doo, Where Are You!" was created through a process called "limited" or "planned" animation, which was devised a decade earlier by Bill Hanna and Joe Barbera.

Unlike full animation, limited animation does not require an entirely new drawing for every frame of film. Only the part of the character that absolutely has to move -- say, an arm or head or leg -- actually moves, while the rest of the figure remains stationery. This is accomplished by splitting up the character onto different "cels" -- sheets of acetate or celluloid onto which the figures are painted and then photographed. The bottom cel may contain the character's body, while the cel laid over it contains the arm or head, or whatever part is required to move.

Many of the early Hanna-Barbera characters wore neckties or collars so that the separation between the body cels and the head cels would not be apparent, and their faces were often designed to have muzzles so that the mouth could be animated on a separate cel. But in "Scooby-Doo, Where Are You!" none of the characters had that kind of facial separation.

Iwao Takamoto, vice president of creative design for Hanna-Barbera Cartoons, Inc., said, "When I designed the dog and the teenage characters too, I got more flack from the animators because of the fact that none of them had those muzzle lines. That influenced the animation because it became a little fuller."

"Scooby-Doo, Where Are You!" would set the standard for a more full-style of television animation than had been offered before. While the television animation of today has progressed considerably since the earliest days of limited animation, the method of creating a show remains essentially the same:

Each half-hour episode is written in script form.

The script is rendered visually on a storyboard, at which time additional gags are included.

The original voice cast of "Scooby-Doo, Where Are You!" included the late Don Messick as Scooby-Doo and deejay Casey Kasem as Shaggy, as well as Frank Welker, the only cast member who remained with the franchise. In the current "Shaggy & Scooby-Doo Get A Clue!" he not only voices Fred, which he has done since 1969, but he has now taken on the role of Scooby-Doo, too.

The episode is "laid out," or broken down, into shots on paper. This phase of production includes staging the action and designing the "sets," props, and any new characters the episode requires.

The director passes the work onto the animators, who draw the scenes and lip-sync the mouths of the characters to the voice tracks. Today, virtually all television animation use overseas studios, and the style is much less limited than it used to be. The studio for "Shaggy & Scooby Get A Clue!" is Digital eMation, Inc., based in Korea.

In years past, the animation drawings were traced with ink and then painted (on the back) onto clear sheets of acetate; today the drawings are scanned into a computer system and inked and colored digitally.

Animation is largely "pre-edited," meaning there will not be different takes of a shot presented to the editor for intercutting. Still, there may be a need for some editing. Post production also includes adding in the music and sound effects.

"The animation itself [in 'Shaggy & Scooby Get A Clue!'] continues to be traditionally created by hand," said supervising producer Eric Radomski. "The balance of the production -- character color, background paintings, film compositing, editing, music and sound effects -- are digitally created, and occasionally we will incorporate some 3-D camera effects."

Writing and breaking down a story for a half-hour episode takes about four weeks on average. Starting from the final script stage, it takes about six months to put the episode through the production process. Of course, the production of the episodes overlaps -- many are in one stage or another of the process at any given time.

Now that we've covered the nuts and bolts, let's look into the myths and realities about "Scooby-Doo." They're on the next page.