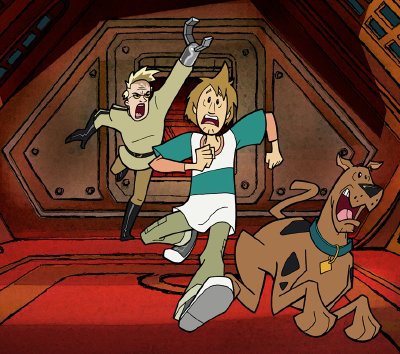 SCOOBY-DOO and all related characters and elements are trademarks of and copyright Hanna-Barbera. The nefarious Dr. Phibes is just the latest Scooby villain.

Here's a guide to the episodes of the newest "Scooby-Doo" series, "Shaggy & Scooby Get A Clue!"

After inheriting a fortune from Shaggy's Uncle Albert, Shaggy, and Scooby learn that they have been charged with tracking down the bumbling bad guy Dr. Phineus Phibes, who wants Uncle Albert's formula for nano-technology, which is hidden inside Scooby Snacks.

Shaggy and Scooby thwart Dr. Phibes' plan to melt the glacier of Mount Zeryodelwietzen in Switzerland in order to ruin a conference on global warming to be held there.

Chaos reigns as Shaggy and Scooby crash a country club in order to save three world-renowned inventors from the clutches of Dr. Phibes.

From the safety of his spaceship, Dr. Phibes attempts to create an electrical storm that will cover the Earth for all time, and it is up to Shaggy and Scooby to save the world.

Dr. Phibes manages to slip a dangerous robot butler into Shaggy's and Scooby's mansion to replace their own "ro-butler," Robi, on the eve of an important mansion-warming party.

Shaggy and Scooby fight an artificially intelligent computer virus that lodges into their mansion's advanced computer system (dubbed "Smart House"). They must prevent it from corrupting the country's weapons defense systems.

During the taping of a cooking show, Shaggy and Scooby find themselves squaring off in the kitchen against the evil Chef Suki Sukihari and his mind-control hibatchi.

Shaggy and Scooby are called on to find the world's most famous detectives, all of whom begin disappearing at the Mystery Solvers of the Millennium Awards. As they track the trackers, they discover the event's host is not who he appears to be.

Dastardly Dr. Phibes turns his attention to the rain forest, which he plans to destroy in his quest for a plant that promises immortality. Shaggy and Scooby team up with a pack of marmosets to fight him.

Dr. Phibes uses an invisibility ray on two of his henchmen and sends them to steal a disintegration ray housed in a government facility. Joining the fray are Fred, Velma, and Daphne, who think they are chasing ghosts.

Shaggy and Scooby enter the "Polar Bear 3000" race across Greenland in order to stop Dr. Phibes from transporting a device that will knock out all electronic and telecommunications equipment on the planet.

Out in the desert, Shaggy and Scooby once again battle Dr. Phibes, who this time has built a monstrous giant robot in his own image.

Dr. Phibes assembles the world's most dangerous villains and charges them with getting rid of Shaggy and Scooby. Before the dust clears, however, Dr. Phibes ends up obtaining exactly what he wanted all along: Uncle Albert's top-secret formula.

What's in store for the Great Dane and his friends? Find out in the final section.