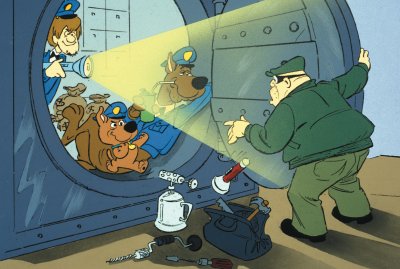 SCOOBY-DOO and all related characters and elements are trademarks of and copyright Scooby and Scrappy teamed for several series throughout the 1980s.

Here is a listing of the various incarnations of "Scooby-Doo" since it burst onto the scene in 1969.

Guest stars included animated versions of Sonny & Cher, Tim Conway, Dick Van Dyke, and Don Knotts, all of whom provided their own voices.

Shorter Scooby-Doo (and family) episodes ran along with those of "Dynomutt, Dog Wonder."

As the title implies, reruns of earlier episodes.

Half of this hour-long show was devoted to seven-minute cartoons featuring Scooby, Shaggy, and Scrappy-Doo. Episodes were rerun in 1984-85 as "The Scary Scooby Funnies."

The emphasis was on comedy in this show, which featured another of Scooby's cousins, cowpoke Yabba-Doo.

Scooby and Scrappy were half of this hour-long series, which also featured the unrelated adventures of "Petey the Puppy." Episodes were rerun in 1984 as "Scrappy-Doo."

This show featured reruns from "Scooby-Doo, Where Are You!" and "The Scooby-Doo/Dynomutt Hour."

Scooby, Shaggy, and Daphne were back as the core team in new mystery episodes.

For the first time, the spooks were real, in this half-hour series featuring Scooby, Shaggy, Scrappy, Shaggy, and a warlock named "Vincent Van Ghoul," voiced by Vincent Price.

A radical change in the Scooby franchise, in which both Scoob and his friends were depicted as grade-school kids. Solving mysteries was still on the agenda, though the comedy was hipper and the look more stylized.

This series represented a return to the original spirit with the complete gang, but it was updated for the 21st century.

Shaggy and Scooby are back on the case, but the adventures now have a science-fiction flavor.

"Scooby-Doo and the Reluctant Werewolf" / 1988 / Syndicated

Both of these are live-action films with digitally animated Scooby-Doo and monsters.

As you've seen, Shaggy and Scooby now host their own show, "Shaggy & Scooby-Doo Get A Clue!" On the next page, we offer a full episode guide.