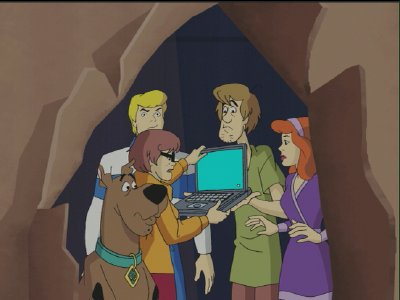 SCOOBY-DOO and all related characters and elements are trademarks of and copyright The gang finds a laptop clue in 2003's "What's New, Scooby-Doo?"

Many Saturday morning shows have been designed to be educational as well as entertaining. "Scooby-Doo," in any of its incarnations, is not among those shows. Young viewers have always been invited to exercise their brains by following the "Scooby" gang around as it finds clues and puts them together into a solution, but the emphasis of "Scooby" has never been anything other than entertainment. The newest version of the show, "Shaggy & Scooby Get A Clue!," is no different. While the program introduces such topical complications as global warming and jungle deforestation, it is not done in an instructional manner.

It may be surprising to learn, then, that one of the reasons for the creation of the original series, "Scooby-Doo, Where Are You!," was to satisfy the growing demand for an alternative to action-oriented cartoons that were increasingly being dubbed as "violent."

Exaggerated cartoon "violence" had been a staple of animation practically since the medium was invented -- though in the early years, nobody took it very seriously. This was in part because cartoons of the 1930s, '40s, and '50s were not specifically made for children -- they instead were aimed at a general theatrical audience. Only when cartoons went to television did they attract the label of "kid's stuff."

But in the mid-to-late 1960s, the television networks were increasingly taking heat for "violence" in children's programming, notably in action adventure series such as "Jonny Quest," "The Herculoids," and "Birdman." Fred Silverman, who was the head of children's programming for CBS, was looking for a show that would not include guns of any kind, extreme cartoon gags involving sticks of dynamite or frying pans as weapons, or even physical combat. "Scooby-Doo, Where Are You!" was designed with plenty of opportunity for slapstick, but there were never any overtly violent acts, not even fighting. Even today, nearly forty years later, with "Shaggy and Scooby-Doo Get A Clue!," the villains are vanquished more by trickery and wits than with a tangible threat.

In fact, the only time Scooby-Doo and the gang ever made network executives nervous was early on in the development period, when the initial treatment for the show was judged as too scary for a young audience. Of course, the ghost, ghoul, or monster the gang happens to encounter is usually not a supernatural creature at all, but rather a human criminal in disguise. Inevitably, the gang exposes him or her.

Now that we have the background on the cartoon, how about details on the stars themselves? In the next section, we cover Scooby, Shaggy, and the entire gang.