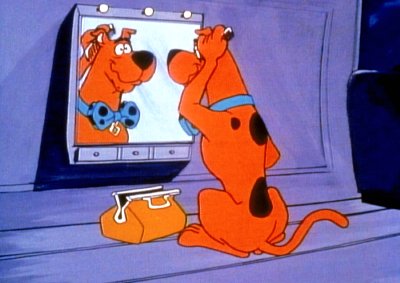 SCOOBY-DOO and all related characters and elements are trademarks of and copyright Disguise is a major tool in Scooby-Doo's crime-solving arsenal.

Rumors and myths abound regarding Scooby-Doo and his friends. Some of these have been presented in books as unequivocal facts, but the truth is, they fall more into the realm of urban legend.

Myth No. 1: The name "Scooby-Doo" was inspired by Frank Sinatra's recording of "Strangers in the Night" ("...dooby, dooby doo..."), which CBS exec Fred Silverman heard while traveling on an airplane.

Verdict: Probable. Silverman swears this is true, and the story has been told so often, it just might be.

Verdict: False. "While I hate to affect the regional pride of these Bostonians, I have to say that there is no truth to it," said Iwao Takamoto, who designed the characters. What the proud people of Beantown seem to recognize is a deliberate plan to give each kid a kind of archetypal universality.

Myth No. 3: The granddaddy of all Scooby-Doo rumors is that Shaggy and Scooby represent stoners, which is why they constantly have the munchies while driving around in a flower-power van. According to the rumor, this was a deliberate in-joke by the animators that flew over the heads of the network brass.

Verdict: False. Widespread, but still false. Dozens of arguments could be offered as to why no self-respecting middle-aged Hanna-Barbera artist or writer in 1969 would even think of jeopardizing the success of the show with such a joke, but the easiest refutation is to go to the source. "It's not true," Takamoto said. "The creative team never brought that into play in our thinking about this show. It wasn't until much later that this sort of rumor began to surface." Besides, Takamoto added, one of the key creative players in the development of Scooby-Doo was a network executive, which means that Silverman would have had to have been in on the joke himself or uncharacteristically unaware.

Ultimately, the fact that so many people develop legends around these drawn characters, even to the point of wanting to identify with them, is a testament to the degree to which Scooby, Shaggy, and the the rest of the gang have been taken to heart by viewers over the years.

Scooby and the gang have starred in myriad television series and movies. On the next page, we offer a rundown of their screen appearances.