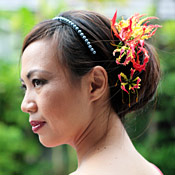 In Thai weddings, much of the pageantry focuses on the groom instead of the lovely bride.
iStockphoto

People from many different ethnic and cultural backgrounds live together in Thailand, a country so friendly it is known as the "Land of Smiles." Due to its historical and geographical position as a crossroad, this country's population is ethnically diverse, with many Thais coming from Chinese, Indian, Malaysian, Laotian, Burmese, Cambodian and other backgrounds. While most of the people in Thailand practice Buddhism, there is also a sizeable Muslim population, in addition to Christians, Hindus and others. Over the years, Thai people have borrowed bits and pieces from each other's practices and backgrounds to create new cultural and social traditions.

Napha Phyakul Quach's wedding reflects some of Thailand's ethnic and cultural mix. She was married by an imam in a Muslim ceremony and wore her Indonesian mother's wedding dress -- a batik sarong. Her husband, who is Chinese, wore a traditional Chinese gown. The ceremony incorporated the Chinese, Indonesian and Thai tradition of the groom's procession to the bride's house; the groom passed through the series of symbolic "gates" to reach her home.

In Thailand, the pageantry of a wedding focuses primarily on the groom, who makes his way to the bride in a procession that is often accompanied by music. Friends and relatives of the groom, bearing food and gifts such as silver, gold, jewelry and cash, join in the procession. "The procession to the bride's house is the most exciting part of the wedding," Phyakul Quach observes. On his way, the groom passes through the "silver gate" and the "gold gate," which consist of string or chains made of silver or gold that are held at each end by young children. The groom pays a token fee -- more for the gold gate than the silver one -- to the children, who then "open" each gate so he can reach the bride.

The Thai wedding ceremony is held during the day at the bride's home and is generally fairly small, attended only by family and close friends. It is usually followed by a large evening reception at a hotel or party room, complete with food, music and entertainment. At a Buddhist ceremony, monks are invited to the wedding to chant prayers and are presented with alms and food by the couple. The bride and groom kneel together, and a sacred thread is draped from one head to the other, forming a circle and connecting the couple. They each clasp their palms together in the traditional prayer-like gesture called wai, and one by one the guests pour a conch shell full of sacred water over the couple's hands while saying a blessing for good luck. Guests then present their gifts to the newlyweds, either by placing an envelope containing money into a nearby basket or giving a gift.

The groom's family is responsible for the bride's dowry, a sum that is often negotiated between the two families. The dowry may be displayed, before the ceremony, as a pile of cash to indicate that the groom is a good catch. After the ceremony, the money is generally given to the new couple to help them start their lives together.

To choose the date of the wedding, a couple will usually go to the temple where they worship and consult with a monk, who will determine a lucky day for the marriage, explains Prama Mong, information officer for the Tourism Authority of Thailand. The date is usually chosen by considering the birth dates of the bride and groom and by factoring in lucky days and the phases of the moon.

Thai brides don't have a standard wedding dress but tend to wear a traditional, close-fitting, brightly colored Thai silk ensemble during the wedding ceremony. It is often adorned with gold jewelry encrusted with semiprecious stones. White is growing in popularity, and some brides opt for a Western-style wedding gown at the evening reception. Black is never worn -- and should not be worn by guests -- as it is considered to be bad luck and the color of mourning.

Thai women take their husband's last name, but ethnic Chinese women do not, explains Phyakul Quach. She notes that in Thailand, last names are unique to each family. Her paternal grandfather and grandmother, for instance, created Phyakul by taking sounds of their Indonesian and Chinese first names and creating a Thai name that would be unique to their family. And while she has taken her husband's last name - Quach - her children use the name Quach Phyakul to reflect their Thai heritage.