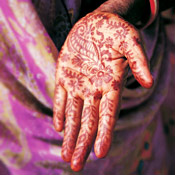 A Moroccan bride will hold a henna party with her closest female friends and family before the wedding.
Getty Images

Every bride is beautiful on her wedding day, but in Morocco, she gets to be a queen, too!

"For the bride, the wedding is like a coronation. She is dressed and treated just like a queen," explains Mohammed Marrakchi, director of the Moroccan National Tourist Office in New York, N.Y. The days when most Moroccan marriages were arranged belong to the past, Marrakchi says. Today's young people choose their own partners, and while the parents may have veto power, they often accept their child's choice, recognizing that times have changed. "Morocco is evolving from a traditional patriarchal family to a nuclear family," Marrakchi observes. "But children still pay homage to tradition and will ask the parents to bless the marriage." A Moroccan wedding celebration marks the joining together of two families, as well as the establishment of a new family. Marriage is considered the most important decision a man and woman can make, and the wedding is an elaborate affair that can last from three to seven days.

Before the wedding, a team of chefs arrives to prepare the meals, and the family employs group of women who devote themselves to making the bride look her best. They dress her in a traditional Moroccan wedding gown of brightly colored silk, overlaid by a sheer gown embroidered with gold thread. Jewels are arranged to cascade around her face, and makeup highlights her eyes.

In the late afternoon or early evening, simultaneous parties are held at the home of the bride and the groom. The two families and their guests celebrate well into the night with a feast, music and dancing. Sometime after midnight, the groom leaves his home and proceeds to the home of the bride. He is accompanied by his guests, as they sing, beat drums and dance (or honk their car horns) on their way to the bride's house. Upon his arrival, the bride is seated on a circular cushion and hoisted onto the shoulders of the crowd. At the same time, the groom is also lifted into the air, and they are paraded among their guests in royal style.

Later, the bride changes into a traditional outfit that reflects her family's region of Morocco, and the party continues. Around dawn, the bride changes her outfit again, and the couple leave the party. Up until about 30 years ago, they would retire to a special room to consummate the marriage, and afterward, the guests would examine the bedclothes for blood as evidence that the bride was a virgin. Today, however, the newlyweds are afforded more privacy and get to "disappear" for a while - generally going to a hotel - and are no longer expected to display their sheets for the guests.

"The couple leaving the party indicates the detachment of the nuclear family from the homes of the parents," Marrakchi explains.

No matter how many people the family invites to the wedding, they always expect more, as it is not unusual for guest to bring guests, who are also welcome at the festivities. Parties and feasting continue throughout the week, as the couple visit friends and relatives, display their gifts, and get settled in their new home.

The Berber Wedding Fair - High in the rugged Atlas Mountains of Morocco, rural Berber tribespeople celebrate an annual wedding fair. The Imilchil fair, or moussem, commemorates the ancient, yet tragically familiar story of a son and daughter of warring tribes who, forbidden to marry, chose suicide rather than be parted from one another. Heartsick tribal elders vowed from then on to permit their children to choose their own spouses, and the moussem evolved into a place for members of the isolated communities to meet each other and to marry. Today, young women arrive at the fair dressed to wed in a white dress covered by a traditional striped woolen cape in tribal colors. Young men roam the crowd, looking for suitable wives, and a woman, if chosen, has the right to accept or refuse. However, a quick decision is expected, and at the end of the fair, a mass wedding is performed. While some of the couples may have just met, most have a passing acquaintance with one another but follow tradition by marrying during the fair.

The Henna Party - Before the wedding celebration, the bride has a henna party with her female relatives and closest women friends. Henna has been used in Morocco for centuries to create intricate decorative designs that are applied to the palms and feet of the bride and her guests. The geometric and floral designs have a number of meanings, including protecting against evil spirits, bringing good luck and increasing fertility.

Wedding Guest or Critic? Why We Judge Our Friends' Weddings
Tips for Planning a Perfect Wedding
Altar Falter: What's next when the bride or groom says "I don't"?