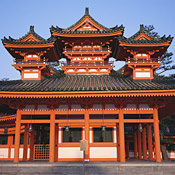 Something old, something new, something borrowed … Today's Japanese couples enjoy weaving together their favorite rituals from ancient Japan and modern Western culture to create an unforgettable wedding day.

Japan's traditional Shinto wedding ceremony is very formal, and usually very private, with only close family and a few guests present. However, the ceremony is declining in popularity as nearly two-thirds of couples now choose a trip down the aisle, Western style.

The Shinto ceremony takes place at a shrine and symbolizes not only the union of two people, but the uniting of two families. As part of their wedding vows, the bride and groom exchange cups of sake (rice wine) in the san-san-kudo, or "three-times-three," ceremony. A Western-style ceremony may be held at a church or at one of the many wedding halls or hotels that have set up chapels specifically for that purpose. A minister may preside, but, since less than 1 percent of the population is Christian, it's unlikely that the couple will share his affiliation.

"Most people marry in Western style even though they are not Christian. It's just the fashion; it has nothing to do with religion," says Keiko Okano, a New York publicist who has attended many weddings in Japan. "They just think it's more romantic and appealing."

Both Shinto and Western-style ceremonies are followed by an elaborate reception during which the bride appears in several changes of clothes, a tradition dating from the 14th century that signifies the bride is prepared to return to everyday life. At a Shinto reception, the bride, who has been married in a long white kimono, may arrive in a colorful, embroidered kimono, change into a Western-style white wedding dress and then into an evening gown or a party dress. If she has had a Western-style wedding, the order might be reversed, with her arriving in a wedding dress, then changing into a kimono and then into one or more party dresses, says Soichiro Taguchi, assistant vice president of Nikko Hotels International.

"The highlight of the reception is to see what the bride wears," Taguchi says.

At the reception the couple is introduced, and friends and business colleagues make speeches honoring the bride and groom. The bride and groom cut the cake and light a central candle display and candles at the guests' tables.

A banquet is served, and guests eat and drink - but don't expect to do the electric slide! "One thing they don't do at Japanese weddings is dance," says Okano. However, guests often sing or play an instrument for the newlyweds.

Japanese couples don't register at the local department store - wedding guests are expected to give cold, hard cash. The amount varies depending on the guest's relationship to the bride. The money is generally wrapped in small, beautifully decorated paper packets and often helps to defray the cost of the reception. At the end of the reception, the newlyweds present each guest with a gift, such as a ceramic dish or a bottle of wine.

Since wedding receptions in Japan can be extremely expensive, a growing number of Japanese couples choose to be married abroad.

"If you get married in Japan, you are expected to have a big wedding reception and to invite your business colleagues, bosses, friends and relatives," says Taguchi. "If you get married in Hawaii, you can invite fewer guests, plus you can have your honeymoon there - it saves a lot of money."

As recently as 1970, more than 40 percent of Japanese marriages were arranged, designed to link two families together. Today less than 10 percent of marriages are arranged and those that are more likely result from a computer matching service than the traditional "go-between." Marriage in Japan has changed tremendously over the past few decades, and changes are still underway as people marry later, women consider keeping their surnames, and remaining single becomes an increasingly acceptable option.