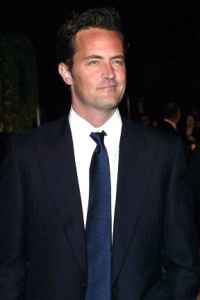 Matthew Perry's character on the sitcom "Friends" increased the popularity of the baby name Chandler.
Photo by Mark Mainz/Getty Images

Many names that suddenly become popular are inspired by figures in the media, whether they are real actors or athletes, such as Ashton Kutcher or Jalen Rose, or fictional characters such as the mermaid Madison in the film Splash.

Of course, modern parents are not the only ones affected by the media of their day. Thelma, for example, became a popular name for English and American girls after British author Marie Corelli invented it for the beautiful heroine of her bestselling novel Thelma, published in 1887.

But since the 1950s, television has been the most effective medium for creating new name fashions. Mallory, for example, became popular for girls when the character called Mallory appeared on Family Ties in the 1980s. Although a few American parents had named sons Dylan after Welsh poet Dylan Thomas or perhaps musician Bob Dylan in the 1960s, the name exploded in popularity in the 1990s after the character Dylan McKay appeared on Beverly Hills, 90210.

Daytime soap operas also affect what Americans name their children. Kayla, now one of the top 25 names for girls in the United States, barely existed before Kayla Brady appeared on Days of Our Lives in 1982.

People often assume that when parents take a name from the media they want to honor the star or character who has the name. This is rarely the case. Most parents today don't want their children to have common names, but at the same time they want the names they choose to "fit in." They are therefore always on the lookout for "different but not too different" names, and when such a name gets a lot of exposure in the media, many parents discover it at the same time.

This is shown by looking at the names of the characters on the hugely successful television comedy Friends. The names Ross and Joey weren't affected at all by the program; Monica and Rachel had very tiny increases, and Phoebe a somewhat more noticeable one. The series had the biggest impact by far on the name Chandler, which more than doubled in use just after Friends became a hit. This was not because viewers liked or admired the character Chandler any more than the others, but because he was the one who had the cool new name that young parents were searching for.

Even horrific characters can have a positive impact on a name's use if the name itself fits in with fashionable sounds. Gage, Peyton, and Samara are examples of scary film characters who nevertheless inspired namesakes. Names in the news can also have an effect. The number of American girls named Camille increased by 50 percent in 1969 and 1970 after Hurricane Camille hit the Gulf Coast, so it can be predicted that the number of girls named Katrina will increase in 2006 in spite of the name's association with a huge natural disaster.

Any media that is popular with people in their 20s and 30s can create a fashion for a name. Popular music inspires names both through songs, such as Rhiannon, and singers, such as Shania. Today's young parental generation is now starting to discover baby names like Raiden and Rinoa through video and computer games. Some parents are still inspired by novels, as shown by names such as Arya and Novalee. Science fiction and fantasy books, video games, and films are particularly noticeable as name sources, probably because these stories often require writers to create brand-new names.

Choosing your baby's name is a very important decision. The guidelines mentioned in this article, hopefully, will help you select a name that both you and your child will enjoy for a lifetime.