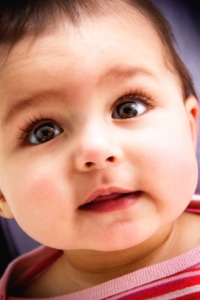 Traditionally, Hispanic-American babies were often given saints' names, and both male and female saints were considered appropriate. Hispanic-American boys are often given religious names such as Jesus, Angel, and Salvador. Girls are often named in honor of the Virgin Mary, using words from her devotional titles such as Araceli, Rocio, Consuelo, Dolores, and Mercedes.

Traditional boys' names remain especially common in the Hispanic-American community, because there is still the expectation that most boys will be named after their fathers or grandfathers, a custom that is now rare in other ethnic groups.

However, not all the names popular with Hispanic-Americans are traditionally Spanish names. Hector, Oscar, and Rene have long been popular names for boys in Latin America, and non-Spanish immigrants to Central and South America, as well as the modern media, have introduced many new names. In particular, Spanish-language television programs called telenovelas, most of which are produced in Mexico, have popularized the names of their stars and characters wherever they are shown, including in the United States. For example, Vanessa, a very British name, is popular in the Hispanic-American community because it was the name of the title character in a television program starring Lucia Mendez, one of Mexico's most popular actresses.

Other non-Spanish names more popular with Latinos than Anglos in the United States include Astrid, Daisy, Evelyn, Leslie, Lizbeth, and Yasmin for girls and Axel, Edgar, Edwin, Elmer, George, Giovanni, Omar, and Yahir for boys. Ariel and Alexis are very common names for Hispanic-American boys, while other ethnic groups now give them mostly to girls. Some Latino parents also create brand-new names for their children, especially daughters. At the moment, invented names beginning with the letter Y are in vogue, and many Hispanic girls are being given names like Yaritza, Yanelis, Yosayra, and Yuritzi.