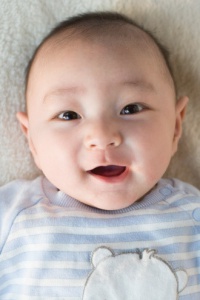 Many Chinese-Americans give their children American-style first names, though they often give a Chinese-language name as the middle name.
iStockphoto/Thinkstock

As long as there has been language, there have been names. Naming is the first task of speech through which we differentiate one person or thing from all others. Every society has a naming system, and all these systems have certain common elements.

Throughout the world, each child is assigned a sound or series of sounds that will be his or her name. Because that name is a part of the language of the child's parents, it immediately identifies the child as belonging to a particular society. So our names identify us both as individuals and as members of a group.

In many parts of Africa, a child's naming day is a festive occasion that usually occurs a week or so after the birth. Girls are named sooner than boys, but only by a day or two. An older person bestows the name, first by whispering it to the baby, because a newborn should know his or her name before anyone else does, then by announcing the name to everyone attending the ceremony.

Many Native Americans developed naming systems in which a person's individual name included the name of his or her clan. For example, all the members of a clan that has the bear as its totem animal have names relating to bears, such as Black-Bear Tracks and Black-Bear Flashing Eyes.

In some groups, children are given secret names that are not revealed until the child reaches puberty or another important stage of life. In other Native American nations, an event that occurs at a child's birth may become the child's name. Today, a person living on a reservation may have one name at home but a different name when he or she is off the reservation.

In China, all given names are created out of words in the Chinese language that have an obvious, immediate meaning. Names are believed to reflect the character of the person, and great care is taken in selecting a child's name. Usually about a month after the child is born, the parents attempt to create an original name. Many girls are given names that signify beauty, such as Sweet Willow or Morning Star. Boys are given names that reflect strength and good health. In rural areas, many Chinese names still include a "generation name," a word or syllable that is the same for all children born in a family in the same generation. Three sisters, for example, might be named Yuan-Chun, Ying-Chun, and Xi-Chun, which mean "First Spring," "Welcome Spring," and "Cherish Spring."

With China's one-child policy, this custom is fading in urban areas, but some Americans of Chinese descent continue this tradition by giving all their children names containing the same syllable (such as Mar- as seen in Marco, Marisa, Marla, Marlene, Marshall, Martha, and Marvin). Most Chinese-Americans give their children American-style first names, though they often give a Chinese-language name as the middle name, as in Brittany Ngon Lee.

Jewish names are some of the oldest names in use today. A Jewish boy is named officially when he is circumcised on the eighth day after his birth. A girl is named as soon as possible after her birth. Traditionally, an Ashkenazic Jewish child is not named for a living person for fear that the Angel of Death will mistake the child for the older person if their names are the same.

Historically, first-generation immigrants to the United States from Europe and East Asia have tried to adopt American naming customs, though since they are not completely assimilated into the culture they often give their children names that seem out of style. For example, recent immigrants from China and Korea are much more likely to name daughters Linda or Eunice than other Americans.

The second generation of an immigrant group usually gives their children names that are no different from those of the majority. The third and fourth generations, however, often begin to revive names from their ancestry. Many Irish-Americans began this process in the 1940s, re-introducing traditional Irish names such as Sean, Kevin, Sheila, and Caitlin that have gone on to become generally popular. This process has now begun with Italian-Americans, who, since 1990, have strongly increased their use of traditional Italian names such as Isabella, Gianna, Lorenzo, and Leonardo.

Because of the strong influence of Islam and Hinduism, immigrants from the Middle East and South Asia don't adopt "Western" names as readily, though they do often try to choose names from their religious traditions that they think will be easier for other Americans to pronounce. Muslim-Americans give their children names such as Ali, Fatima, Zaynab, and Ziad; Hindu-Americans use names such as Aryan, Diya, Mira, and Rohan. Many names popular with East Indian-Americans, such as Arjun and Shreya, have been influenced by the stars of India's huge Bollywood film industry.