The Future of 'Dora the Explorer' 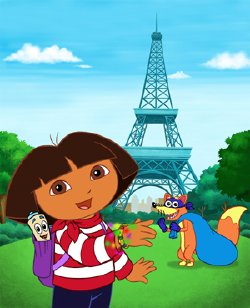 Dora is America's favorite preschooler. With episodes of "Dora the Explorer" running on Nick Jr., Noggin, and CBS, Dora seems to be everywhere. What does the future have in store for Dora the Explorer?

A lot. In early 2005, "Dora the Explorer" spun off into a second show, "Go, Diego, Go!" Dora's cousin, Diego, helps operate an animal rescue center in the jungle. While Dora is pretty fantastical, Diego's story is told from a more realistic point of view.

Dora isn't currently in production on a regular basis, but co-creators Valerie Walsh and Chris Gifford gather the old gang together every now and then for special episodes. Many of these episodes are longer and go straight to DVD, which makes it convenient when toddlers want to see the same episode over and over. After the special episodes are released on DVD, they air on Nickelodeon.

The team produced a new hour-long episode that will air on Nick Jr. on November 19. The episode, "Dora's World Adventure," is sure to become a favorite because Dora travels around the world. She visits the Eiffel Tower in France, the Kremlin in Russia, and the Great Wall in China. Check your local listings to see Dora in action.

Dora is also on the road entertaining children in live shows all over the world. The "Dora the Explorer" live show is opening in France in December and London in the spring, and plans to take it to Latin America are in the works. The tour has been so successful that a "Go, Diego, Go!" live show is in production and will debut in January.

The biggest news is Valerie Walsh's project. "It's been our dream since the first year to make a movie," she said. "We want to make it live action and film it in the jungle. It's what we're working on now."

The creators are working with Nick Movies to bring "Dora the Explorer" to the big screen. Development is in the early stages, but they've shot tests of a little girl against a rainforest background. The initial plan is that Boots will be three-dimensional and have the look and feel of a Chronicles of Narnia character.

The movie, like all "Dora the Explorer" television shows, can be expected to end with Dora and Boots asking viewers what part they liked best. For Walsh, it's the creation. "I love coming up with stories," she said. "It's the hardest part and my favorite part. Of course, I also love when Dora and Boots hug. I'm always asking, Can we get another hug in there? Hugs and giggles are the best."