Interactivity and Learning in 'Dora the Explorer' 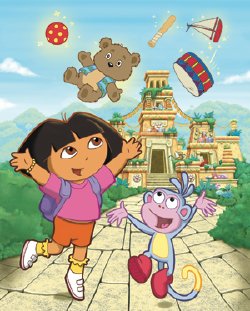 ©2006 Nick Jr. In a typical "Dora the Explorer" episode, kids are encouraged to count items, such as these toys.

"I really felt motivated to get the kids up [and out of their chairs]," Walsh said. "I always had this quandary of putting kids in front of the TV like a babysitter. The beauty of Dora is that you're invited to stand up and jump or clap, do something physical."

When planning each "Dora the Explorer" episode, writers strive to have an interactive piece every minute. "Kids are so trained to watch TV. Not a lot of interaction is happening," Walsh said. "Once the kids fall into that passive role, it's harder to get them back up on their feet."

Kids approach education differently than adults. "They don't see counting as work. For them, it's fun. We tap into that," said Walsh, who has a master's degree in education and considers herself to be both a television producer and a teacher.

Parents can reinforce the learning elements from "Dora the Explorer" into daily routines. "One great way is the planning we do through the map," Walsh said. "If you're going to the doctor, make a map. Talk about how you're going to get there and what you're going to do there."

Using the lessons from "Dora the Explorer," parents also can transform mundane tasks into fun learning games. For example, if your daughter is helping you in the kitchen, you can ask her to count for you. If you need two cups of flour, ask, "Can you count in Spanish?" Or have your child get four eggs and count them in both English and Spanish.

Language is another key part of the show. Go to the next section to find out about the importance of language in "Dora the Explorer."