Language in 'Dora the Explorer' 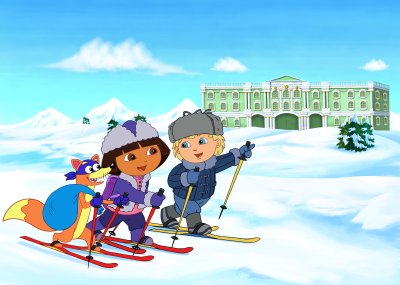 ©2006 Nick Jr. Dora, Swiper, and friend in Moscow in an upcoming "Dora the Explorer" episode.

A unique element of "Dora the Explorer" is Dora's language ability. She's Latina and speaks both Spanish and English. On every show, preschoolers are introduced to a new Spanish word or phrase that Dora uses throughout the episode.

Dora wasn't always a bilingual girl. In the original show concept, she was a rabbit. Even after she became a girl, she wasn't envisioned as Latina -- her original name was Tess.

Neither Valerie Walsh nor Chris Gifford, the show's creators, is bilingual. But that didn't deter Nickelodeon executives from asking Walsh and Gifford to consider making Dora a Latina character. The idea sprang from an industry conference during which network leaders were challenged to portray positive images of Latinos on TV.

"In 1998, when we started developing the show, there was a difference in terms of popular culture," Ms. Walsh said. "Believe it or not, it was only six or seven years ago that a lot of Latin American culture was considered foreign. Now it's more mainstream. We had no idea there would be a cultural revolution happening at the same time. There was a Zeitgeist factor out of our control."

The Spanish words spoken in "Dora the Explorer" are carefully chosen. "We have a language consultant who helps us choose preschool-appropriate words," Walsh says. "These words are repeated over and over in different episodes. They're action verbs that kids use in everyday life, words for counting and colors that they're already using in English."

Dora Around the World

"Dora the Explorer" has become a cultural phenomenon around the globe. Dora doesn't just air in the English-speaking world. It is the number one preschool show in France and also airs in Russia, China, Japan, and Korea, among other countries.

"For the most part, those shows all have Dora in the native language and what we consider our Spanish beats in English," Walsh said. "I've seen it in Chinese. It's pretty amazing. I think kids from the rest of the world just accept this is an American girl."

"Dora the Explorer" also airs on Spanish language channels, with a reversal of the English and Spanish beats.

As critical as language is to the success of "Dora the Explorer," the colorful characters are what really make the show go. We'll look at Dora, Boots, and Swiper in the next section.