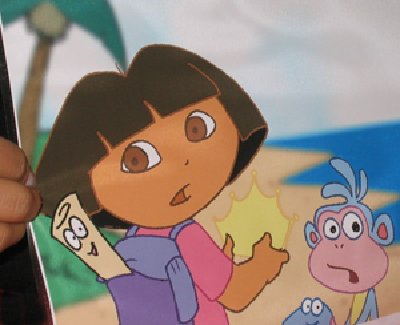 ©2006 Nick Jr. Dora, The Map, Backpack, and Boots in a drawing cell from a Dora the Explorer episode.

Part of what makes "Dora the Explorer" so successful is the show's repetition. Dora will repeat the different goals and objectives of an adventure multiple times. Preschoolers thrive on that repetition, and learn from it.

Not surprisingly, youngsters want to watch the same "Dora the Explorer" episode over and over again. While this might not be the most fun for parents, they should take comfort in knowing that their children are learning every time they watch the same Dora video.

The following is a guide describing many of the most popular "Dora the Explorer" episodes.

Dora and Boots read about a large chicken and set off to meet him. They cross a broken bridge, open a locked gate, and reach the big red hill.

Dora remembers the first time she met Backpack. Backpack helps Dora carry her books back to the library. They solve the Troll's riddle at the Troll Bridge, avoid a raincloud, climb the big rock, and reach the Library.

Dora and Boots are at the beach hunting for seashells when they find a baby fish trapped in a tide pool. Dora and Boots decide to bring the baby fish to its underwater home. They climb over King Crab's Sandcastle and take a submarine ride with Val the Octopus.

In this version of the famous Puerto Rican legend, Dora and Boots find a homesick coqui who's lost his voice. Dora and Boots take the frog home to his island so he can sing again. They cross the ocean and travel past Echo Bush.

A goofy bird mistakes the Map for a stick. The bird flies Map all the way to his nest on top of Tallest Mountain. Dora and Boots have to draw their own map in order to rescue their good friend.

Dora wants to help Papi bake Mamá a special cake for Mother's Day. With Boots's help, Dora sets out to gather the missing ingredients of bananas, nuts and chocolate so that Papi can finish the cake. In the end, everyone celebrates their mothers.

Dora and Boots travel to the North Pole to deliver a present to Santa on Christmas Eve. They go over snowy mountains and across an icy river to reach Santa. The episode has a happy ending -- even Swiper learns about the spirit of giving.

Dora's cousin, Diego, works at the Animal Rescue Center. He makes animal noises and talks to wild animals. A Baby Jaguar calls for help. Dora and Diego her by zip-cording through the Rainforest, moving like the animals, and talking to howler monkeys, snakes, condors, dolphins, and baby bears.

Dora's cousin, Daisy, is playing in a big soccer game that's showing on TV.  Daisy's team is short a player. Dora joins the team and saves the game. To get to the stadium in time, Dora must run, jump, and chin-up her way through the jungle with crocodiles at her heels.

Dora and Boots put on a pirate show for their families. The show's just about to start when the Pirate Piggies sail in and take their treasure chest filled with costumes. Dora, Boots, and their friends set off on a musical adventure to get their costumes back so the show can go on. They sing and sail across the Seven Seas, through the Singing Gate, until they reach Treasure Island.

Dora tells the story of how she first met Boots. On their very first adventure, Dora and Boots have to bring instruments back to the Fiesta Trio so they can play for the cranky Queen Bee. Along the way, Dora and Boots meet Tico, Isa, and Benny, and learn to watch out for that sneaky fox, Swiper.

It's Dora's cousin Daisy's 15th birthday party, her quinceañera. But the party can't start without Dora and Boots because they need to teach everybody the mambo. Dora and Boots must get past the barn, and the rainforest, to Daisy's Party on time.

Dora's cousin, Diego, protects and defends all the animals in the rainforest. But in order to save a Baby Condor, Diego winds up trapped himself. Dora, Boots, and all the rainforest creatures rescue Diego.

Abuela gives Dora and Boots a present for Dora's new puppy, but they'll have to watch out for Swiper, who's got a bunch of new swiping tricks up his sleeves. He builds a swiping Robot Butterfly, he hides inside a Submarine Fish, and he disguises himself as a Dancing Tree.

Dora finds out that her Mami is having a baby, but she doesn't know if it's a boy or a girl. Dora and Boots have to get home quickly to find out the gender of the baby.

Dora and Boots discover a lost Baby Fox. Swiper appears and offers to help bring the fox home to his Mami. Dora, Boots, and Swiper bring Bebe Zorrito back to his Fox Hole. With Swiper's help, they scoot past the volcano, over the Prickers and Thorns, and then find Bebe Zorrito's Mami at the Fox Hole. Swiper even learns to say "Thank you."

What's in store for Dora in the future? We'll tell you all the secrets in the final section.

Download this PDF for a comprehensive guide to the first four seasons of "Dora the Explorer."