Creating a 'Dora the Explorer' Episode 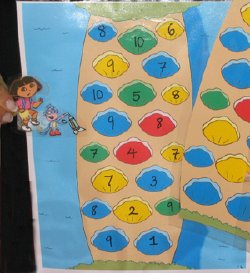 Multiple elements go into creating an episode of "Dora the Explorer." There are so many moving parts, in fact, that each episode takes about 18 months to make. In this section, we'll examine how the production process works.

Everything begins when the writers gather in a meeting and present story ideas. Each writer is assigned a slot in a show and is charged with pitching ideas for that slot.

Once an idea is accepted, the story goes into the outline phase. Writers take two outlines and develop them into storybooks that are tested with kids in preschool and daycare facilities. Based on the youngsters' reaction, a script is written and then reviewed by the show's creative group.

"Sometimes things will change," said Valerie Walsh, the show's co-creator. "Everyone's writing a paragraph. We're reading everything at the table together, telling each other 'that worked' or 'this was really fun,' 'this felt very flat.' It does feel very collaborative."

Once the script is ready, music composers write songs for the episode. After the lyrics and songs are finished, the next step is to record the voice actors, which can be challenging since they are young children.

After the script is recorded, it goes to a team of animators. Storyboard artists do rough sketches, with input from the writing team. After revisions, the animators prepare clean boards of the scenes and put them into a story reel, or an animatic, a device that pairs the sequenced images with the sound track. Animation directors then make certain that the video and audio elements are working in concert. For instance, the actors' lips need to move according to the words coming out of their mouths.

"One of great things about animation is that you can have anything you want," Walsh said. "The downside is you have to draw everything you want -- even mundane things, like a pen lying on a desk and pictures on the wall so it looks like a cozy family home."

Once the creative team is satisfied with the look of the characters, props, and backgrounds on the storyboards, the boards are sent to Korea for full animation and coloring, which takes 14 weeks.

"Dora the Explorer" storyboards typically run 350 pages, with three pictures per page, almost like a comic book. Animators fill in everything that happens between each picture. They draw thousands of pictures, all by hand. Twenty people in New York work on the writing, research, and music, and another 50 people at the Nicktoons animation studio in Burbank, California, work on the show. The crew in Korea numbers 250.

One of the reasons the creation process is so complex is because of the interactive and learning elements that are built into each episode. In the next section, we'll look at interactivity and learning in "Dora the Explorer."

How To Break Into TV

For those interested in creating network television, "Dora the Explorer" co-creator Valerie Walsh has some advice: Get an internship.

"I was an intern ten years ago when I was in graduate school," Walsh said. "Half our staff here at Nickelodeon was hired after their internships. The amount of exposure you get when you're interning is amazing."

If you don't land an internship, try to work on a show as an assistant. That will enable you to meet people in the industry, as well as understand how a show works.

"If you haven't gone to film school or worked on a show, take classes on writing spec scripts and write your show on your own," Walsh said. "It's really, really hard if you've never worked in TV to get in. You're going to need something that shows your talent. You've got to have a script or portfolio to get you in the door."