Characters in 'Dora the Explorer' 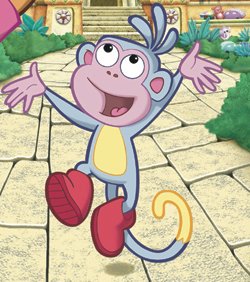 The characters in "Dora the Explorer" are critical to the show's success. At the heart of every episode is a loveable little girl named Dora Marquez. She's feisty, strong, and good-hearted. Dora and her friend Boots are great role models for kids. Swiper, meanwhile, is an interesting villain. Here is a look at these characters:

Dora Marquez is the seven-year-old main character of "Dora the Explorer."

"We chose the age of seven because it seemed like she'd be old enough to be out on her own in the jungle with her animal friends," said Valerie Walsh, the show's co-creator. "She's old enough to sit down and read a book."

Child actress Kathleen Herles is the voice of Dora. Herles auditioned for the role when she was seven and has grown up with the character.

Boots the monkey is Dora's best friend. Boots goes along with Dora on most of her adventures, helping out by climbing trees and reaching things that she cannot. Boots is more like a preschooler than any other character on the show. Kids relate to the fact that, like them, Boots is too young to accomplish many things. He can't read, and he needs Dora's help to achieve most tasks.

In the original story ideas, Boots was a cute little mouse that fit into Dora's pocket. She would take him out and play with him. But the creators soon realized an important element would be missing if Boots remained a mouse.

"[Dora and Boots] would never be able to hold hands," Walsh said. "And how cute would it be for this little girl to go on her adventures into the jungle holding the hand of her best friend?"

The show creators decided Boots would become a monkey. Everyone loved the name Boots, so the creators thought about a way to allow him to keep his name. One pair of red boots later, Boots morphed into the monkey best friend that Dora hangs out with today.

"Swiper, no swiping!" This is the line commonly associated with the masked tricky fox that attempts to thwart Dora and Boots in almost every episode. If Dora catches Swiper stealing, she must recite the above line three times to stop the thief. If she doesn't see him in time, he takes what doesn't belong to him.

Critics have observed that Swiper seems to steal just for the fun of it -- on the few occasions he does manage to steal from the characters, he will take the item and fling it up to the highest mountain.

Walsh has an explanation. "Swiper is a one-dimensional character. You don't know why he steals, and we did that on purpose. Kids this age are learning about more complex thinking. The emotional and psychological reasons behind someone being bad have to be explained so thoroughly that we didn't want the back-story.

"We've had this discussion with advisors who wanted us to get into the motivation behind Swiper's bad behavior. We decided that it's cleaner without it. Similar to villains in fairy tales, we don't get into the why."

With so many great characters and story lines in "Dora the Explorer," children enjoy watching the same episodes over and over again. In the next section, we'll provide summaries of some of the most popular Dora episodes.