10 of the Worst Parenting Tips Ever 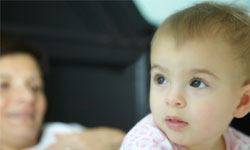 Every parent has received bad advice at one time or another. Be it child-rearing techniques that seem to stem from the Stone Age or poorly conceived tips from adults who've never actually raised children, most new moms and dads quickly learn the art of nodding politely then changing the subject.

But what about those so-bad-you-stop-what-you're-doing-and-call-your-relatives kind of parenting tips? We're talking about the kind of advice that's so ill-advised you remember and discuss it years later. Do people really still give infants alcohol? Do some parents actually believe that TVs make good babysitters? Yes, they do, which is why we thought it'd be a good idea to make a list of the most misguided parenting tips out there. We'll go over egregious offenders for every age level, and we'll even set the record straight on one controversial practice that's both dangerous and gaining popularity. (Hint: It involves slumbering with a pint-sized partner.)

10: Your Baby Can Just Cry Himself to Sleep 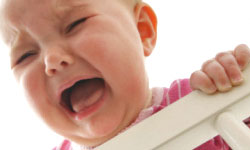 Though your baby probably could cry himself to sleep, you really don't want him to.

When a child younger than six months old cries, it's always for a legitimate reason. Your little one could be telling you he's hungry, tired, needs to be changed or even just wants to cuddle in the only way he knows how. Babies this young haven't yet learned the cause and effect of their actions, so it's impossible to spoil them. The quicker you respond to your little love's cries, the more comforted he will feel. Prompt attention to his needs will decrease his overall anxiety and cause him to realize that he's important and has worth, which is one of the most valuable lessons he'll ever learn.

People have been swaddling babes throughout history, and while the process of restricting infants' movements with a tightly pulled blanket may seem unnecessary and even cruel to adult eyes, babies actually find it comforting.

Studies have shown that swaddling reduces crying, lowers anxious babies' breathing and heart rates, and allows infants to sleep longer, with fewer interruptions. The technique has even been shown to reduce the risk of sudden infant death syndrome (SIDS) for babies sleeping on their backs. What's more, any parent who practices swaddling can tell you that it makes little ones feel better. It has a naturally calming, almost sedative effect, which can be just as much of a relief for sleep-deprived parents as it is for fussy babies.

Our ancestors swaddled! The earliest archeological evidence we have for swaddling comes from 4000 B.C., when migrant people in central Asia carried swaddled babes on backpack-like boards. The ancient Greeks and Romans also swaddled their infants, and the practice is mentioned in the Bible, too.

Whiskey may have worked wonders when horses were the dominant mode of transportation, but with today's advancements in science and technology, we don't have to give our babies hard liquor to soothe their aching gums. Admittedly, giving your baby the equivalent of a nip or two may ease his teething pain. Unfortunately, it could also be fatal. Even in small doses, alcohol can be poisonous to infants. As much as a teaspoon of brandy or whiskey could be enough to intoxicate a baby, and it can also cause hypoglycemia, seizures and respiratory failure. So, make sure your tot stays off the sauce, OK?

There are plenty of effective methods to ease your little one's agitation. Try giving him a wet, frozen washcloth; frozen teething toys; or just rubbing a clean, whiskey-free finger across his gums. Of course, distraction works, too, so maybe just a little bit of extra one-on-one time or a few more minutes of cuddling before bed may be all your baby needs to rest easier at night.

Teething babies really are fussier at night. Teeth tend to move through the gums more during the darker hours of the day, which is why children are often more irritable after bedtime.

7: Sharing a Bed With Your Child Is Perfectly Safe

Sleeping near each other is fine, but there's a big difference between sharing slumber space with your little one and sharing a bed. Co-sleeping, which is the term used for parents sleeping within arm's reach of their children, is healthy, safe and encouraged by the American Academy of Pediatrics (AAP) for infants, especially during the first year of life. Co-sleepers maintain their own individual sleeping spaces by using extensions that connect to the bed or a nearby cradle or bassinet. Sleeping in such close quarters makes for easier, less disturbing feedings; strengthens bonding and allows babies to fall asleep more easily.

Conversely, bed sharing occurs when parents sleep in the same bed with their baby. It may seem like a small difference, but because adult beds aren't built with infant safety in mind, bed sharing has been proven to increase the chance of sudden infant death syndrome (SIDS). Soft mattresses, pillows, blankets, loose headboards and an easier ability for the baby to transition from sleeping on his back to a prone position have all been shown to pose an increased risk for SIDS, and the AAP lists bed sharing as a significant hazard for slumbering babes.

Despite the dangers associated with the practice, bed-sharing is becoming more commonplace. If you feel you must share the bed with your baby, move the bed away from the wall and make sure there's no significant space between your mattress and headboard. Also, strip off blankets, pillows, comforters and quilts.

6: Let Your Toddler Discover His Own Interests

Playing with crayons may be more stimulating than practicing the alphabet, but just as every artist needs to know how to spell and sign his name, every child needs a little guidance -- especially at home.

Sure, your kid's habit of uninterrupted floor wandering may teach him that the cat is soft and Daddy's shoes smell funny, but if left completely to his own devices, he may also find a wall socket.

Let your kid be himself and discover the world on his own terms, but don't be afraid to step and take charge in when necessary.

The Montessori method of teaching emphasizes self-education though exploration and curiosity. Children in Montessori schools are encouraged to follow their own pursuits and interests and learn by doing instead of listening. There are more than 5,000 Montessori schools in the United States and more than 17,000 worldwide.

During an interview with Style magazine, Jada Pinkett Smith discussed her and hubby Will Smith's philosophy on disciplining their children. She said, "We don't have rules. We come up with agreements." While we're happy the Fresh Prince and his family have found a way to successfully negotiate bedtimes and curfews, most of us (and our children) need a few concrete rules.

No parent wants to be the bad guy, and frankly, punishing your kid is never an enjoyable experience. But children need to understand that actions have consequences, and sometimes negotiations just aren't going to cut it. You never have to resort to corporal punishment, and often talking about an issue may be enough to drive your point home. But, if you want to put an end to bad or dangerous behavior, sometimes you're going to need more than a persuasive argument. Taking away computer privileges or grounding a kid sends a message.

Don't give empty threats if you want your children to respect your authority. If you threaten to send your kid to bed without dinner, really be prepared to make him go to bed hungry. Following up words with actions is the only way to gain credibility.

4: Why Pay a Babysitter When You Have a TV? 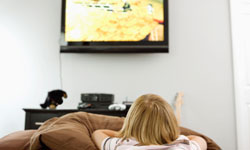 A surprisingly large number of parents think the TV set is an acceptable alternative to a living, breathing childcare provider.

It's not so shocking when you think about it in terms of dollar signs. The boob tube is captivating for young kids, and floating a cable bill is much cheaper than paying for a babysitter to watch your little one after school during the work week.

No matter how tight your budget may be, there are other options. Regardless of where you live, there are after-school programs that are both safe and affordable. If you're unsure about where to start looking, ask your child's teacher for advice, or contact your local YMCA.

3: Anything Your Child Does Is Good Enough

In today's era of trophies for the losing team, it's important for kids to learn how and when to push themselves to do better. Shakespeare didn't pen "Romeo and Juliet" the first time he picked up an inked quill -- it takes time to develop skills and talents. Rewarding your child for mediocre achievements gives the impression that OK is good enough.

Now, we're not saying that you should constantly find fault in your kid's work -- we're just pointing out that if your child is practicing writing sentences but neglects to include verbs, you might want to show him how much those action words can improve his prose. Adjectives and adverbs, however, can wait for another day.

2: It's Your Job to Make Sure Your Kid Gets Good Grades 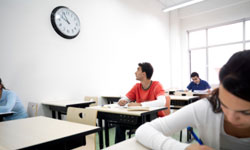 Your child's academic performance is up to him.
EIGHTFISH/Getty Images

Your job as a parent is to help your child reach adulthood and become the best person he can be -- that's it. If your studious little scholar's path includes getting straight A's, that's wonderful, but grades aren't everything. Not every kid is capable of making the honor roll, and there's nothing wrong with that. Everyone has different strengths, and while grades are important, they shouldn't be the entire focus of your child's (or your) existence. Childhood is over all too quickly, so make sure your kid has time to relax and enjoy himself. He can study anytime, but that lazy Sunday afternoon won't last forever.

We all need to pay our way, but not with credit cards. And we certainly don't advocate that your child charge his way through the college years.

Even when your kid heads off to seek a higher education, he's still, well, a kid. He may be old enough to drive, vote and join the military, but chances are he's not mature enough to charge his expenses for the next four (or more) years at college. Open lines of credit are almost never a good idea for college students, and no matter what his major is, it probably won't help him handle the mountain of debt he'd accumulate while earning his degree.

Scholarships and student loans are a great way to pick up the expenses you're not able to cover, and if money is still tight, he could always attend a local university and (gasp) continue to live with you until he graduates and finds a job. It's a scary prospect, we know, but it's not nearly as frightening as your baby still paying off his college credit card debt when he has babies of his own.