How to Throw a Superhero Birthday Party

Browse the article How to Throw a Superhero Birthday Party 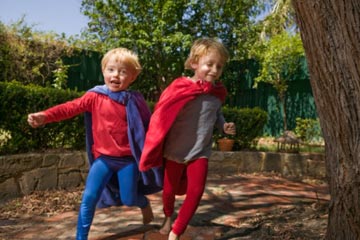 Looking for a birthday party theme that will let young imaginations soar? You can't go wrong if you plan a superhero-centered fete. This theme's a sure-fire winner because it appeals to both boys and girls, and a range of ages.

After all, superheroes exhibit unique skills, wear colorful costumes and save the world with great regularity. It's the perfect triad for a birthday party that's easy to plan and even easier for your guests to remember in the months that follow.

And, unlike tamer themes, a superhero birthday party lends itself to action-packed games and other activities -- none of which require you to empty your child's college savings account in order to accomplish. Whew!

Armed with a superhero theme, the logistics simply fall into line, beginning with a few ideas for party invitations on the next page. 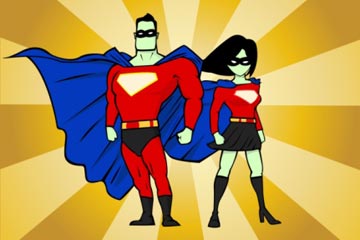 Use images like this as inspiration for invitations and decorations.
Hemera/Thinkstock

Thanks to a stroke of sheer genius, you can take your child's birthday invitations from blasé to blamo (that's superhero-speak for "awesome"). Simply mail a cape and mask along with your invitations. Not only will it grab potential attendees' attention, but they can also wear the cape and mask to the party.

There are a number of online retailers that offer invitations with personalized superhero themes, such as BirthdayInABox. Or, you can make your own invitations using cardstock. Design a custom card by pasting your child's likeness, along with a superhero graphic (you can find these online and print them) and the party information. Another memorable idea is to draw a cartoon strip that features your child as a superhero, as well as the party's date and time. If you're not artistically inclined, you may need to ask a favor of a family member or friend.

As for the party's location, your options are flexible. If you have the room (and the inclination), you can host it in your home. If not, it's a relatively simple matter to transform a rented party room into a superhero cave. A day or two before the party, spray paint some cardboard and cut it into caption bubbles (the kind drawn near cartoon characters' mouths) and write a few iconic superhero sayings on them. "Pow" and "Zap" are timeless choices.

Dress the birthday party table in a colorful tablecloth that suits a superhero theme, such as Wonder Woman-red or Green Lantern-green, then use comic book pages as placemats. Round out the look with helium balloons tied throughout the room. Of course, superheroes are sure to be hungrier than most, so it's best to have plenty of food on hand. Check out our menu on the next page.

Like most birthday parties, a superhero theme should offer a cake as its crowning glory. Most cake supply stores will have cake pans in unique shapes; it shouldn't be difficult to find a bat-shaped pan or one that's designed after a particular comic book hero or his insignia.

Once you've got dessert in hand, add some heartier fare to the menu. Any sandwich can become a "hero," especially if kids build their own. Create a do-it-yourself sandwich bar with cold cuts, sliced cheeses, lettuce, tomatoes and condiments. Side dishes can include gelatin cut into superhero shapes, as well as long ropes of licorice (every superhero needs a lasso, right?).

It's also a good idea to keep your guests occupied with hands-on party favors. Place a kid-friendly comic book by each place setting as a party favor. You can add to the fun by giving each guest an egg-shaped container of Silly Putty. They can press the Silly Putty against a cartoon strip. When they peel it off, they'll find a mirror image of the cartoon on the Silly Putty. And, because they can take the comic book and Silly Putty home, these party favors will offer hours of fun. If you need additional superhero party favors, online retailers like Oriental Trading sell them by the dozen.

Looking for other ways to keep your little superheroes entertained? We've got plenty of ideas on the next page. 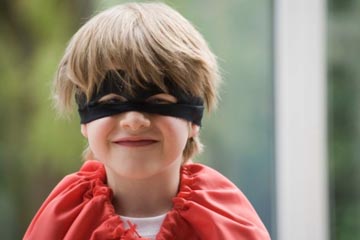 Kids can use their "X-ray vision" in a variety of superhero games.
Jupiterimages/BananaStock/Thinkstock

All superheroes have one thing in common: They like to stay active. And the superheroes at your child's birthday party are no exception, so be sure to have plenty of games for them to play.

A good place to begin is by asking them to use their X-ray vision. Put a variety of small items in a box (ranging from grapes to plastic water guns) and see if the guests can gauge what they are by feeling inside the box without looking. Older kids may get a kick out of a surprise, such as a half a tomato (cut side up) or other items full of interesting textures. Another inexpensive idea is to cover several small buckets or large-mouth containers in aluminum foil to serve as planets. Then have guests toss ping-pong balls that have been painted green (do this a few days before the party) into the planets. These kryptonite balls can be thrown from varying distances, depending on guests' age and perceived difficulty level.

It's also a good idea to set up different activity stations, each with its own game or craft, that will offer a fun take on the party's superhero theme. In addition to the games suggested previously, wrangle a couple of volunteers for face-painting, using specially formulated paint from a craft supply store or online retailer. At another station, offer superhero-themed coloring books, markers, stickers and superhero cardstock cutouts.

Ask the adults to join you, as you dress as a superhero, too. They may find themselves having just as much fun as your smaller guests. After all, you've already put a lot of effort into planning the party. Now it's time to enjoy it!