Why do brides wear white? 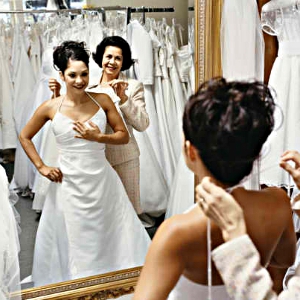 Choosing the right dress is one of the most important considerations for a bride. See more wedding gown pictures.
Digital Vision/Thinkstock

Queen Victoria. "Godey's Lady's Book." Developments in textiles. America's post-war prosperity. It's safe to say brides-to-be think of exactly none of these things while shopping for a white wedding dress. (Champagne toasts, fabulous honeymoons and mountains of wedding presents, you bet.)

But if you think the white wedding dress has been around since time immemorial, think again. It's a relatively new standard -- less than 200 years old -- that stems from a bouquet of symbolism, economics, cultural mores, myth -- and yes, fashion.

Read on to find out how the white wedding dress became a 19th-century status symbol.

The White Wedding Dress Through the Ages

Many cultures intuitively equate white with purity and virginity. But there are other reasons for a bride to wear white. Into the early 20th century, a white dress spoke volumes about a bride's wealth. Because it was (and still is) an easily soiled color, only the rich could afford servants to keep a white garment clean. As a result, brides usually chose darker colors better suited for multiple wearings. During the Great Depression, a bride's Sunday best doubled as matrimonial garb. But America's post-World War II economic affluence, increased production of synthetic fabrics like rayon and nylon, and the arrival of a full-bore wedding industry made white wedding dresses available for seemingly every social bracket.

While there are accounts of brides marrying in white dating back to England's Princess Philippa in 1406, the 1840 marriage of England's Queen Victoria to her cousin Prince Albert really put the spotlight on the white wedding dress. Images of the queen in her white satin gown turned heads and newspaper columns about the wedding captivated the masses. Later, an 1849 edition of "Godey's Lady's Book" -- among the first American women's magazines -- declared: "Custom has decided, from the earliest ages, that white is the most fitting hue, whatever may be the material. It is an emblem of purity and innocence of girlhood, and the unsullied heart she now yields to the chosen one" [source: Forsling].

A Black and White (and Red) Issue: The Wedding Gown as Fashion

Nineteenth-century wedding dresses weren't exactly "white." The absence of chemicals to bleach fabrics made the hue more of a cream color. Today, dyes are used to create shades like buttercream, French vanilla, oyster, champagne and alabaster. And because different dressmakers often use alternative names for the same color tone, one woman's champagne could be another woman's light gold.

Make sure to consider your hair and skin tones when you pick your wedding-dress color. For instance, stark white can appear nearly blue, and works best with a dark-haired, dark-eyed, dark-skinned bride. Ivory -- which some in the industry don't include under the umbrella of white colors -- works well with redheads and fair skin.

As far as alternative colors, while red wedding dresses are common in China (the color is said to bring wealth), it's usually white or bust in the United States. When a bride does decide to wear pink, red, black or some other nonwhite dress, she's just revealing her personality, Tiedemann says. "It's usually that kind of girl that just wants to stand out that much more, and goes for something that's pink or has red in it."

Can I Wear White to a Wedding -- if I'm Not the Bride?

If you're not exchanging vows, wear white to a wedding at your own risk: Unless the bride happens to be wearing a dress of a different color, the gesture is widely considered to be rude. "Intuitively, I would think the reason you wouldn't want to wear white is because everyone knows the bride is going to wear white, and she's basically the center of attention. So I don't think anyone would want to compete with that," said Dan Rentillo, design director for David's Bridal. And while it's not unheard of, bridal parties decked in white are rare.

Wedding Dresses in the Age of Remarriage 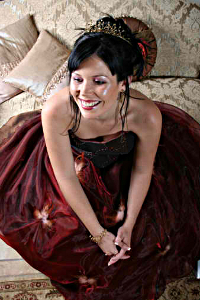 While it was once considered less appropriate for brides to wear white for a second marriage, now there's less of a stigma attached. Likewise, it's more common today for brides getting married the first time to wear non-white dresses.
iStockphoto/Thinkstock

Brides getting married a second time (or third or fourth or ... ) often select a red, pink or other nonwhite dress from the racks. That choice might stem from the long-standing cultural taboos that once disapproved of second-time brides exchanging vows in white.

But remarrying in white isn't such a big deal these days. We all know divorce rates have climbed since the 1960s and 1970s -- hitting an all-time high in 1981, according to the Associated Press -- and second marriages have become increasingly common. In her book "All Dressed in White," Carol McD. Wallace writes that Priscilla Kidder of Priscilla's of Boston once declared that white was "America's happy color" and that all brides should be allowed to wear it. In 1980, Brides magazine gave repeat brides the OK to don the color.

For the most part, the rest of the bridal industry agrees. "People don't necessarily feel encumbered by rules, especially if you're getting married for a second time," Rentillo said. "I think the one thing that does look odd is getting married the second time and a wearing the big, traditional, princess bridal gown. That can look a little silly. But people can do what they want, right?"

For more on marriage customs and related topics, walk down the aisle to the links on the next page.

Do your bridesmaids need matching hairstyles?
A Well-groomed Groom
How much should your spend on your wedding hairstyle?