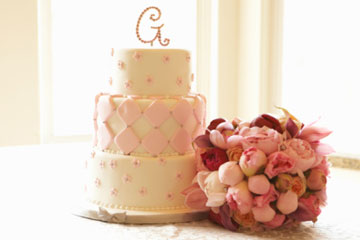 Choosing the right kind of cake for your wedding can be a real hassle. Between finding a baker, deciding on a flavor and selecting a style, there's a good chance you'll end up spending more time messing with this glorified pile of fondant than anything else on your to-do list. And wedding cakes are expensive -- really, really expensive. In fact, for a bride on a budget, paying for this one dessert may cost you that luxurious reception site or (gasp) even force you to return a night or two early from your honeymoon. But it doesn't have to be that way. Have your cake and eat it, too, by faking it.

What is a fake wedding cake?

Fake wedding cakes are exactly what they sound like. They're round Styrofoam molds covered with fondant or Perma-icing (a type of non-edible, artificial icing), and they look just as good, if not better, than the real thing. In fact, like high-end wedding cakes, most fake cakes are custom-designed for your wedding, so you can choose the color, style, number of tiers and ornamentation -- including options like silk, fondant or real flowers -- when placing your order. Regardless of how you decide to fake it, you'll still get to cut the cake, and your guests won't go hungry.

The top tiers of most fake cakes are real. This is the part you'll cut, share with your new hubby, and save for your one-year anniversary. The counterfeit confection will then be wheeled out of sight, and your servers will return with slices of sheet cake to feed your guests. Some versions of fake cakes are entirely inedible, with a hidden compartment holding a couple of real pieces for the bride and groom.

Why You Should Fake It

We know, it seems like an elaborate hoax. But even if you're having a relatively small ceremony, you can expect to spend at least several hundred dollars on a basic, nondescript wedding cake. Brides with larger guest lists will end up paying hundreds more, and if you'd like to sweeten the deal with fancy fillings, gourmet frostings and a few fondant flowers, this once-in-a-lifetime dessert may cost you a month or two's salary.

A fake cake, on the other hand, will be the centerpiece of your reception. Just like any other wedding cake, it will be custom-designed according to your preferences, and it will probably cost $300 or less. By choosing a fake cake, you'll also avoid those half-baked cake-cutting fees that many reception sites charge, which can range anywhere from $1.50 to $4.00 per slice, depending on the venue. Going with a fake cake gives the impression that you forked out for a top-tier cake, but you'll pay only a slice of the cost.

But They're Still Fake…

Fake cakes, however, aren't all fondant and flowers. In the end, they are fake, and pulling out a couple of stashed slices from a secret compartment will never be as romantic as a traditional cake cutting. You might not be parading around in a 2-carat cubic zirconia wedding ring, but you are deceiving your guests. It shouldn't be a big deal for most brides (after all, what's a good ceremony without a few props?), but it could be embarrassing if someone discovers the truth. It probably won't happen, but wedding guests can be unpredictable -- especially if there's an open bar -- so you can never be sure. However, the risk is minimal, and if you're a budget-conscious bride having to make some tough choices, a fake cake could be the perfect solution to your wedding-planning woes.

What's faker than a fake cake? A cake you rent for a few hours, then return. There are several cake-rental outfits online, and all you have to do is select your cake, pay a deposit and ship it back after the reception. Depending on the size, weight and design of the cake, you may end up paying around $150 to $250, but some cost upward of $400.