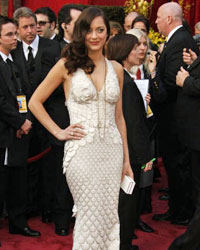 The Oscars are one of the most anticipated awards shows of the year, but not because of the gold statuette alone.

Although the Oscars were created to recognize the most superior film work and performances, fashion rules the roost at the Academy Awards.

It's hard to tear your gaze away from the parade of glamour on the legendary red carpet. Versace, Oscar de la Renta and Givenchy are among the most well-loved fashion designers whose dresses have been worn by actresses to the esteemed event. In fact, many designers became world-famous because of a design they created for a blushing beauty at the Academy Awards. 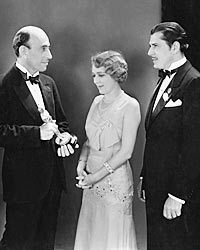 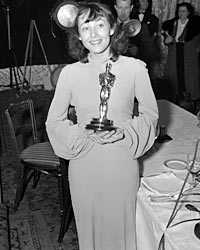 Luise Rainer was nominated for an Academy Award in 1937 for her role in "The Great Ziegfeld,"but she wasn't planning on attending the event. She'd won an Oscar the previous year and didn't expect to win two years in a row.

Rainer was surprised when her studio chief called, ordering her to attend. She didn't own many dresses, so she actually wore her nightgown, stating that it was "the nicest dress [she] owned."

Judging from this picture, it's hard to tell Rainer's dress is a nightgown in disguise. The form-fitting garment with bell sleeves and mock turtleneck looks thoroughly stylish (and we bet it was the most comfortable dress ever worn to the Oscars). Rainer did take home an award, becoming the first thespian to win back-to-back Oscars. 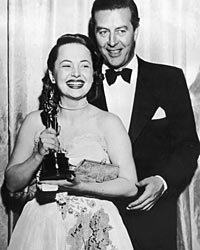 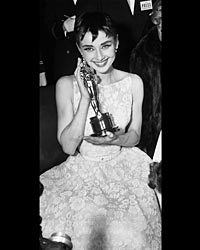 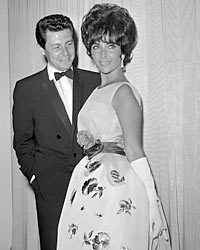 It's Dior all the way for Elizabeth Taylor in 1960.
Bettmann/CORBIS

Elizabeth Taylor won the Oscar for Best Actress in 1960 for her role in "Butterfield 8," in which she played a call girl for actor Laurence Harvey.

Her Dior gown was comprised of a full, ivory skirt and a bright yellow silk top. Around her waist, she wore a hunter-green sash and red silk rose. The screen siren completed her look with elbow-length silk gloves.

A few weeks before the Oscars, Taylor came down with a severe case of pneumonia and underwent a tracheotomy. Surgery didn't keep her from attending the Academy Awards. She showed up in her darling Dior -- tracheotomy scar in plain view -- and accepted her award with her husband at her side.

Rumor has it that right after she walked backstage, she went straight into a bathroom and fainted. 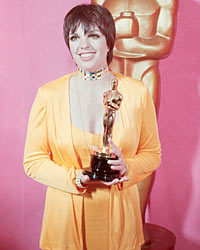 Liza Minnelli won the 1972 Best Actress Academy Award for her role in "Cabaret."

Despite Minnelli's larger-than-life star power, she opted for a simple Halston cashmere dress and matching jacket … in bright, bold yellow. She accented her ensemble with a woven gold and copper choker, and a long gold chain that hung below her bust line. On her feet? Matching yellow pumps. (Note: This was before the fashion world turned up its nose at matchy-matchy outfits, so we give Minnelli credit for her efforts.)

Minnelli was the first actor to win an Oscar whose parents also received Academy Awards during their acting careers.

At the end of her acceptance speech, Minnelli said, "Thank you for giving me this award. You've made me very happy." 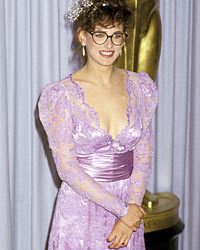 Marlee Matlin's lavender lace and silk gown by Theoni Aldredge was a showstopper -- even for 1980s fashion!

The dramatic, plunging neckline tapered into a tightly cinched waist with a lavender silk tie. Balancing the risky top with a modest A-line skirt, Matlin kept the look demure and feminine.

At just 21 years old, Matlin was the youngest woman to receive an Oscar for Best Actress.

She won the award for "Children of a Lesser God," which was her film debut.

What could make this victory even more amazing? Marlee had become deaf at the age of 18. With emotions high, she gave her acceptance speech entirely in sign language. 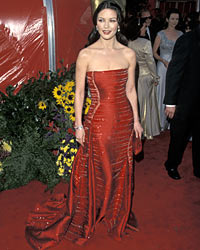 Catherine Zeta-Jones made quite a scene at the 1999 Academy Awards in a red Versace dress with metallic gold horizontal detailing that emphasized her hourglass figure.

The beauty's dark hair contrasted against the rich color of the dress, and she kept her look simple by choosing not to accessorize with statement pieces. Zeta-Jones opted for elegant diamond earrings and a diamond cuff bracelet embedded with a few ruby stones to complement her dress.

"It's an event dress. When I saw it, it was like what I used to dream about wearing," said Zeta-Jones.

She was a star in the film "Zorro," which received two Oscar nominations that year. 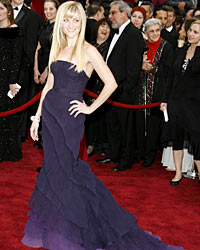 Reese Witherspoon wore Nina Ricci by Olivier Theyskens to the 2007 Oscars when she presented the award for Best Actor.

The figure-hugging strapless gown featured pleated silk ruffles cascading to the hemline, creating a can't-take-your-eyes-off-it effect and drawing attention to the vibrant hues of color ranging from dark purple to a pale lilac.

Witherspoon was very particular about the color of her gown, wanting it to be the perfect combination between blue and red. She even sent a swatch of fabric to her designer to ensure that the color turned out exactly as she envisioned it.

She accessorized her Oscar look with major bling, wearing a 1930s diamond bracelet on her right arm and 12.5-carat diamond earrings. Letting her earrings and gown steal the show, Witherspoon wore her hair down in a simple, sleek style. 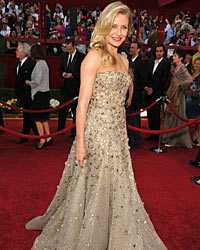 Cameron Diaz stole the show with her Oscar de la Renta gown at the Oscars in 2010.

The Hollywood bombshell chose a champagne-colored dress accented with gold beading and metallic ribbon embroidery. Diaz played down the hard-body image she's known for by going with an elegant A-line silhouette. What the dress lacked in sex appeal, it made up for in luster. It made Diaz shine -- literally.

Styled by Rachel Zoe, Diaz wore more than $100,000 in Cartier jewelry, including white gold hoop earrings and two white gold diamond rings. She donned Brian Atwood gold satin pumps on her feet, and her ruby red lips turned heads all the way down the red carpet.

During the ceremony, Diaz took the stage with comedic actor Steve Carell to present the award for Best Animated Feature.