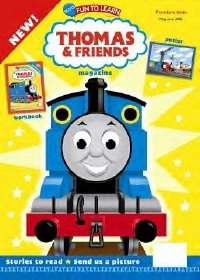 There are almost 300  'Thomas' episodes.

Part of what makes "Thomas & Friends" so successful is that children delight in watching the shows over, and over -- and over again. There are nearly 300 of them, and we hit on some of the highlights on this page. Download our "Thomas" episode guide for a complete listing of all of the episodes.

Jealous that James gets to collect flour for the cakes for a children's party, Thomas bumps James' rail car and the flour spills out, forcing Thomas to find a replacement car.

Really Useful Engine Sir Handel, who has been away, returns and is assigned the job of transporting apples, but he immediately begins to have trouble traveling up hill, and seeks help from Peter Sam -- help he is reluctant to admit needing.

Thomas feels that Jeremy the Jet Plane is too boastful to bother with until Jeremy helps him and his load of children, en route to the Sodor Summer Picnic, avert a brewing storm.

Percy would much rather be helping out as an attraction at the carnival than mundanely pulling a load of coal. He decides to join his friends at the expense of his duties, and learns an important lesson about responsibility.

Percy, entrusted to hand out the work assignments to the other engines, refuses Thomas' help in doing so and ends up giving his friends seriously wrong instructions.

While transporting the clock tower bell, Duncan becomes so enamored of its sound that he forgets the foreman's advice to travel slowly. He only recalls it after the bell has flown off the flatbed and becomes stuck in a tree.

Thomas is assigned to pick up a Christmas tree, but his friends tease him, saying he does not know what one looks like. Peeved, Thomas sets off to prove them wrong, but in his haste and anger he only proves them right.

Busy Toby juggles three assignments to try and finish in time in order to take the afternoon off to visit the farmyard. He thinks his plan has worked, but it is not quite as successful as he had hoped.

Hoping to break his Express record, Gordon stays silent when he accidentally receives Henry's special coal instead of his own regular coal. While Gordon relishes the extra power, he learns that Henry can no longer function with regular coal, and trades back at the expense of his record.

In trying to be as speedy as Gordon, Thomas races through his station stops, leaving his passengers behind. It is up to Bertie the Bus to come to their transportation rescue.

With such an interesting past, Thomas must have a fascinating future ahead of him. On the next page, we look into what's next for Thomas and his Friends.