How Thomas the Tank Engine Is Created 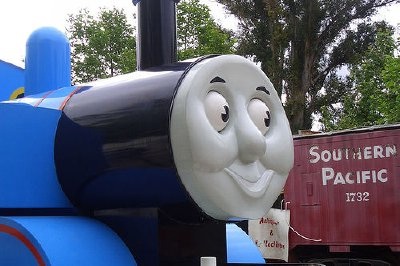 The animation of 'Thomas the Tank Engine' is a fun blend of high-tech and nuts-and-bolts.
©Erin Perry

Now that we've learned about the history and background of Thomas the Tank Engine and his friends, let's take an inside look into how the trains for the television series and movies are created.

The term coined for the production of "Thomas the Tank Engine and Friends" is "live action model animation," and Shepperton Studios, located on the outskirts of London, England, is where the show is brought to life. The train characters are models built to a 1:32 scale, known in the model railway world as "1" Scale. Because very small model trains are filmed moving in real time, it is a complex production that requires a great deal of intense focus. "For anybody who visited the set, what would strike them would be the absolute silence and the concentration," says producer Britt Allcroft.

As related by Michael Edwards in his article "The Making of Thomas the Tank Engine," which appeared in the April 1993 issue of "Model Railroader Magazine," the production studio is the size of an aircraft hangar, and filled with a collection of more than 70 16-by-20-foot sets.

To create the characters of Thomas, Henry, Percy, Gordon, and the gang, model-makers start with Marklin model train chassis and then modify the bodies to represent the various characters. Under a train's body shell lies the mechanism for moving the engine's eyes -- up, down, sideways, or 'round and 'round -- by radio control. In addition, there is a diaphragm pump and smoke unit to blow the specially formulated "smoke."

But what really brings each engine to life is the faces. Each character has its own basic face, which is first sculpted in clay. Then a rubber mold is made, and several copies are cast in a mixture of resin and auto-body filler. Each replica is reworked into different expressions, from which a final silicone casting is taken.

The characters' faces are changed between shooting sequences and are held in place with nothing more sophisticated than double-sided adhesive tape. Thomas alone has more than 40 faces cast for him, while the other engines have five or six each.

Models are constructed entirely from scratch by a team of three full-time model makers and two part-time freelancers, working under the art director. Actual movement of the locomotives along the tracks is by conventional two-rail electrification using standard Marklin equipment.

For years, "Thomas the Tank Engine and Friends" was filmed with a 35mm camera using a "periscope" lens, which was able to get very close to the model trains while maintaining a wide depth-of-field behind them. According to Allcroft, this was done "so we could get a real sense of reality about their world on the island of Sodor." For the first several seasons the show was edited on film as well, but as computer technology became more advanced, a digital editing system was introduced.

Thomas is now CG animated and is no longer filmed in live action. The CG animation is by Nitrogen Studios in Vancouver, Canada.

In the next section, we'll look at the educational aspects of the "Thomas" tales.