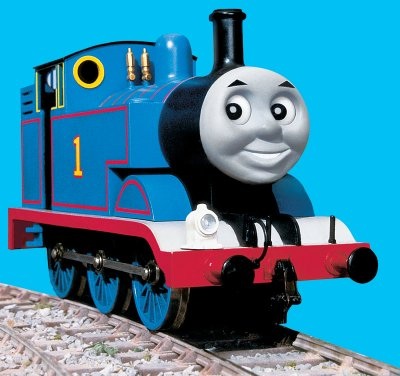 Thomas the Tank Engine is the most widely known fictional locomotive in the world. For 60 years, Thomas and his friends have been delighting children and adults alike with stories of exploration and imagination. With his slightly "cheeky" attitude and can-do outlook, Thomas leads his friends and kids everywhere on adventures that teach timeless lessons such as discovery, friendship, and cooperation.

"Thomas is a blue tank engine who lives at a big station on the Island of Sodor. He's a cheeky little engine with six small wheels, a short, stumpy funnel, a short, stumpy boiler, and a short, stumpy dome." So goes the Storyteller's introduction in the very first episode of "Thomas the Tank Engine and Friends" for television.

But let's go back to the beginning and uncover the origins of the world's favorite little engine. Thomas the Tank Engine is a "true blue" engine who proudly wears "#1" on his side. He and his railway friends have been working the railways on the Island of Sodor for more than 60 years. Thomas is a Really Useful Engine -- which is the highest compliment that the railway director, the Fat Controller (a.k.a. Sir Topham Hatt), offers to an engine -- and though he sometimes gets into trouble, he always comes out on top. He usually learns a really useful lesson in the process.

But did you know Thomas wasn't the very first train in the "Thomas & Friends" stories? It's true. The English television series and its U.S. counterpart are based on "The Railway Series" books by the Reverend Wilbert Awdry (1911-1997). The first book by Rev. Awdry followed the stories of three engines: Edward, Gordon, and Henry. Thomas didn't even exist until two years later.

The late Rev. Awdry was a lifelong railroad enthusiast and an Anglican clergyman. He was inspired to create "The Railway Series" stories by the steam engines he had grown up around. Awdry said, as quoted on the official Awdry Family Website, "I, along with my brother George, inherited our father's love of railways, and after moving to Box, Wiltshire, in 1917, our house was within sight and sound of the Great Western Railway's main line near Middle Hill. I used to lie in bed at night, listening to the engines struggling up the hill to Box tunnel, and imagining that they were talking to themselves."

In 1942, Awdry's young son Christopher came down with a bad case of the measles. Awdry amused his son with original stories and rhymes during the long days of his recovery. His tales of the trains of Sodor proved to be Christopher's favorites.

As chronicled in Wikipedia's entry on "The Railway Series," the first of these stories to be written down was called "Edward's Day Out," about a little old engine named Edward who hadn't been out of the yard and on the rails for a long time. Awdry wrote another story featuring Edward that also introduced Gordon, a proud and boastful engine who eventually got his comeuppance. A third tale, titled "The Sad Story of Henry," was about a silly engine who thinks the rain will spoil his lovely paint. He won't come out of a tunnel and ends up bricked up inside it. This story also introduced the Fat Controller.

Awdry decided it was time to commit the stories to print after Christopher kept correcting his father during his frequent retellings. Awdry drew simple companion illustrations as well -- pictures of the engines with human faces on them -- each with a different expression.

Encouraged by his wife to "do something" with his stories, Awdry sent them to various children's publishers. After many rejection letters, he finally found a publisher willing to take the stories to print. At the publisher's request, Awdry wrote a fourth short story, "Edward, Gordon, and Henry," which brought the three engines together and released Henry from imprisonment in the tunnel. These were published in one volume, "The Three Railway Engines," in 1945.

Shortly after the first stories were finished, Awdry began the idea for a new engine. Christmas 1942 saw the birth of the character that would become the favorite locomotive of many children and adults. Awdry constructed a toy tank engine for Christopher as a Christmas gift, which he named "Thomas." Of course, stories about Thomas soon followed, and were eventually collected and published in 1946 as "Thomas the Tank Engine."

One important and fascinating element of the stories is their basis in fact. Awdry always felt it was important to model his fictional stories and characters around real-life trains and events as much as possible. A few examples of actual incidents recreated in "The Railway Series" include: an engine slipping on excess leaves on the track, a newspaper and bootlaces being used to repair a leaking brake pipe, a cow and her calf charging a moving train, and the inspiration for very first Thomas story -- in which an over-eager Thomas heads out of the station without being coupled to any train cars.

Awdry looked to real life for his trains, too. An obscure 0-6-0T Class E2 shunting engine built for the London, Brighton and South Coast Railway was the model for Thomas. Gordon was based on a Gresley A3 Pacific from the London and North Eastern Railway. Percy was pattered after an old Avonside locomotive, and the Scottish Twins, Donald and Douglas, are based on members of the 812 Caledonian class of 1899. (A meticulous accounting of the connections between "Railway Series" stories and real events is maintained at the Real Stories Website.)

The Reverand Awdry continued to write a new book nearly every year until he retired in 1972. His son Christopher -- now grown and with a son of his own -- took up the writing of the series soon after. He followed the template his father had used before him. He wrote three short stories (this time about Thomas, Percy, and Duck) and then brought them all together in a final story. His first book was titled "Really Useful Engines."

The younger Awdry wrote an additional 40 stories and was instrumental in bringing the popular series to the small screen. Like his father before him, Christopher was also quite adamant that his stories be set in real time and based in real-life events. Consequently, his stories introduced "The Railway Series" readers to more modern machines with the high-speed trains Pip and Emma, and Harold the Helicopter.

Interestingly, neither Rev. Awdry nor his son Christopher ever envisioned Thomas as the star of the books. In fact, at the time the television series began, there had only been two books named after Thomas specifically. Rather, the Awdrys treated the characters in the books as an ensemble and wrote about many different characters, some recurring and others appearing only in one or two stories. Encouragement from fans and pressure from publishers and producers eager to capitalize on the tank engine's fame convinced the Awdrys to focus the spotlight on Thomas. The result is the worldwide phenomenon we know today.

Sadly for Thomas fans, the original "Railway Series" books are currently out of print, but copies may be found online and at used booksellers. The good news is, Thomas and his friends are as close as your television. In the next section, we'll look into Thomas's very popular television show.