The Settings of 'Finding Nemo' 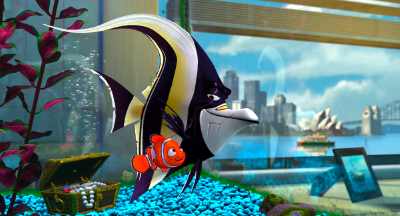 In order to tell the story in "Finding Nemo" convincingly, the technical team had to discover new and improved ways for animating underwater imagery in the computer. Extensive research and development was done to study water properties, and new tools were created to provide the full range of possibilities required by the script.

Supervising technical director Oren Jacob led an effort to capture the look and feel of an organic coral reef and a vast ocean that would respond in a realistic way to the action of the characters. Early on, Jacob and Pixar's global technical wizards identified five key components that would suggest an underwater environment -- lighting (patterns of caustic lighting that dance on the ocean floor and fog beams that shine from the surface), particulate matter (the ever-present debris that appears in water), surge and swell (the constant movement that drives plant and aquatic life), murk (how the color of light filters out over distance and the distance appears dark), and reflections and refractions. Add in bubbles, ripples, drips, and rings, and it's a very complicated environment.

Jacob explains, "This film is far more complicated than 'Monsters, Inc.' in that almost every shot involves some kind of simulation program or simulated movement. On average, there are more things going on per frame in this movie than we've done before by a pretty significant amount. There was more interdependency between the various departments than ever before, and we often went back and forth to make sure the lighting and other components looked just right."

Here's a look at what it took to bring several of the movie's environments to life:

Before drawing a single frame of film, David Eisenmann and his team of animators on the Reef Unit spent a year researching corals and sponges. They were responsible for the film's rich and vibrant opening scenes and building the anemone home of Marlin and Nemo. Their challenge was to create a caricatured version of the coral reef that would suit the purposes of the story.

"Our group started with a realistic approach to the reef," Eisenmann explains. "We were able to do that relatively easily, but Andrew [Summers] and Ralph [Eggleston] felt it was way too busy and distracting. To simplify it, we figured out how many different things we should build and how much variation there should be. The director wanted about 30% of whatever you see on the screen to be moving to make it feel like it was underwater.

"For the reef scenes, this meant simulating movement for sponges, moss, grass and other kinds of vegetation. The reef is very stylized and almost dreamlike. The color palette opens with purples and blues and jumps to vibrant reds and yellows. As the story progresses to the ocean drop-off, things become more real and less colorful. Our modelers were able to keep the reef scenes interesting and exciting by mixing together different shapes and textures."

Adds producer Graham Walters, "Instead of building a reef set and flying a camera around, David and the Reef Unit had an amazing system for building the reef on a shot-by-shot basis. They had an entire nursery of coral, plant life, etc., that they could throw together in different configurations and custom-sculpt each shot for the needs of the story."

The Ocean and Sydney Harbor

Picking up where the Reef Unit left off was the Sharks/Sydney Unit, under the direction of Steve May. This group took on a wide variety of scenes with diverse locations, including the submarine set where the sharks meet, the fishing net scene with schools of grouper fish, the scene inside the blue whale, and all of the shots in Sydney Harbor, from the boat marina to the sewage plant.

"The submarine is supposed to be like a haunted house," May explains. "It's very spooky and creepy. There are nearly 100 mines surrounding the sub and we worked hard to cover them all with moss and have them move with the surge and swell of the ocean. Inside the sub, it's supposed to feel very tight all the time. It's crammed full of knobs, valves, and pipes. Because we had our own layout and modeling people, we were able to quickly build and dress the sub as we went. We knew what we needed and built customized parts along the way."

One of the big challenges for May and his team was simulating the splashing water inside the blue whale after Marlin and Dory are swallowed.

"Pixar really hadn't done splashing water before," says May. "We had to figure out a way to do three-dimensional water, develop the software and new techniques for running simulations to compute the motion of the water, and then render it to look realistic. And the entire time, the whale is swimming and going up and down. Water had to explode and splash all around as the whale's giant tongue lifts Marlin and Dory out of the water.

"This was a whole different water dynamic than the film's underwater scenes, and we had to allow for the large-scale behavior of the crashing water and the very small detailed behavior of our two fish characters. Those different resolutions were very difficult to accommodate. Lighting that scene was probably the hardest thing we've ever had to light because the entire set was moving, organic, and filled with splashing water."

Jesse Hollander and the Tank Unit were responsible for all of the lighting, modeling, shading, and rendering associated with the dentist's office and the fish tank. Creating the tank itself and dealing with issues of reflection and refraction were a major challenge for these resourceful works. They also built a wide range of set pieces for their scenes, including dental equipment, the tiki heads and volcano in the tank, and the nearly 120,000 pebbles on the tank floor. Their work included new breakthroughs in the way cloth, human hair, and skin are created with computer animation.

"One of the biggest things that our unit had to develop for this film was the reflections and refractions connected with the tank," recalls Hollander. "Our starting point was the actual physics of what happens to light when it enters not just water, but a glass box filled with water. This meant computing for glass, then water, then glass into water. But in our movie, we're not dealing with just physics -- we need to be able to have control over those physics.

"Most of the time, we were able to achieve the effect we wanted by offsetting the camera. At certain angles inside the tank, there is something called TIR -- total internal reflection -- where the glass becomes a perfect mirror. We play off this quite a bit with the characters of Deb and Flo. At other angles, the view from the tank shows double imagery. Whenever we're inside the tank, we always use reflections. Refractions become more of a selective thing and we only use them where necessary."

As with all Pixar films, attention to detail was critical. Hollander explains, "As far as the objects in the tank, we tried to give them a very cheap, kitschy Vegas feel -- lots of color and cheap plastic. We went to a lot of effort building fake molding lines and flashing for the plastic items."

A Cast of Thousands

Another key contributor to the film's overall technical advances was Michael Lorenzen, who oversaw a group of animators and technicians in the Schooling/Flocking Unit. This unit helped to create spectacular crowd scenes that included tens of thousands of fish. They also populated the turtle drive sequence with up to 200 background turtles.

Says Jacob, "The thing about 'Nemo' that makes me most proud is that we were able to get to a place where the director was able to concentrate on the filmmaking aspects of the film and was less hassled by technical limitations or frustrations. We were also able to give the animators faster models, many in real time. This was another major breakthrough. Overall, we reduced the render time for each frame and gave the director the visual richness he wanted and within the schedule and budget allowed."

In the end, Pixar's technical team exceeded even its own expectations. "Seeing the coral reef up there on the big screen is simply amazing," says Eggleston. "Every piece of coral is backlit and the entire set is like a jewel underwater. I always thought it would look good, but I had no idea it would look like this. I was the third person to work on this film, so I've been part of the technical process since the beginning, and still I found myself sitting in the theater thinking, 'How did they do this?'"

There's always a future for a movie franchise like 'Nemo' -- but just what is in store? We cover this in the final section.