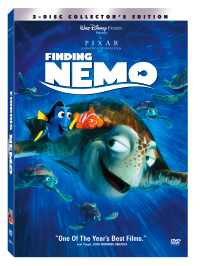 "Finding Nemo" was a big hit and a technological marvel.
Copyright Disney/Pixar. All Rights Reserved

Who would have guessed that a cute little clownfish named Nemo (which means "nothing" in Latin) would become a huge movie star?

Released on May 30, 2003, the animated motion picture "Finding Nemo" was the year's No. 1 box-office success. Today, it remains one of the most beautiful films that Pixar Animation Studios and Walt Disney Pictures have ever made. "Finding Nemo" won an Academy Award for Best Animated Feature and set a high-water mark for the art and technology of computer animation.

In this article, we'll tell you everything you need to know about "Finding Nemo" -- from profiles of the movie's characters to details about a new stage adaption called "Finding Nemo: The Musical." We'll start on this page with a look at the movie's plot, its enormous success, and its creators.

The "Finding Nemo" craze springs from a comedic and eventful story about two small fish who, following a father-son fight, lose each other and must journey across an entire ocean to be reunited and set things right.

On Nemo's first day of school, his nervous dad, Marlin, has trouble letting go. Fighting for independence, Marlin's curious and defiant son swims beyond the safety of their reef home in the Great Barrier Reef. They become separated when Nemo is unexpectedly captured, taken far from home, and thrust into a fish tank in a dentist's office overlooking Sydney Harbor. Buoyed by the companionship of Dory, a friendly-but-forgetful fish, Marlin embarks on a dangerous trek and finds himself the unlikely hero of an epic effort to rescue his son -- who hatches a few daring plans of his own to return safely home.

"'Finding Nemo' is filled with real drama, real emotion and depth, as well as great comedy," says executive producer John Lasseter. "Being the father of five sons, this was definitely a story I could relate to. As filmmakers, we love to have the emotion be true and honest. And even though 'Nemo' is a complete fantasy, it's based on things that are familiar to audiences. The father-son relationship, going to school for the first time -- these are things everyone understands, yet this film is about fish on a coral reef."

"Finding Nemo" became the biggest film of 2003. The film earned $70.9 million in North American theaters during its opening weekend, nearly twice as much as that weekend's second-place film. This set a box office record for biggest debut for an animated film.

"Finding Nemo" was the box-office champion of 2003, earning $449.7 million in the U.S. and Canada alone. A year later, it had earned more than $850 million, making it one of the 10 highest-grossing animated films ever. The film was Pixar's third computer-generated feature-length film -- but its first to be released during the heart of summer vacation -- and cost $90 million to make.

"Finding Nemo" was created and produced by a crew of 180 people working at the Pixar Animation Studios' newly built, state-of-the-art facility in Emeryville, California. Widely considered the best in the business, Pixar specializes in combining creative and technical artistry to make original stories come alive in the medium of computer animation. Its record seems unbeatable. It has made seven of the most successful and beloved animated films of all time -- "Toy Story," "A Bug's Life," "Toy Story 2," "Monsters, Inc.," "The Incredibles," "Cars," and "Finding Nemo" -- which have won a total of 20 Academy Awards and have earned nearly $4 billion at the box office.

"Finding Nemo" was written and directed by Oscar-nominee Andrew Stanton, who co-directed the 1998 Disney/Pixar hit "A Bug's Life" and is credited as co-screenwriter on all four of Pixar's previous animated films.

Lee Unkrich, co-director of "Toy Story 2" and "Monsters, Inc.," again co-directed "Finding Nemo." The film was produced by Graham Walters, a nine-year Pixar veteran who had served as production manager on "Toy Story 2." Based on an original story by Stanton, the screenplay for "Finding Nemo" was written by Stanton, Bob Peterson, and David Reynolds.

Guiding the overall project was Lasseter, the Oscar-winning filmmaker who served as executive producer on "Monsters, Inc." and directed "Toy Story," "A Bug's Life," and "Toy Story 2."

Overseeing the production design was Ralph Eggleston, a Pixar veteran who designed the original "Toy Story" and directed the Oscar-winning short "For the Birds." The film's two directors of photography -- Sharon Calahan and Jeremy Lasky -- brought their expertise to the areas of lighting and layout, respectively, to help capture Stanton's vision for the film on screen.

Now let's look into the real genius of "Finding Nemo," the amazing technology that brought the fish and their wet world to life. It's covered in the next section.