The Characters in 'Finding Nemo' 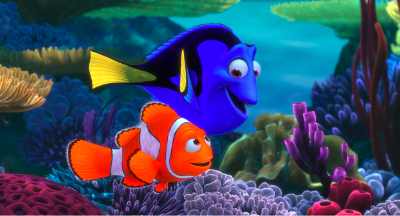 Copyright Disney/Pixar. All Rights Reserved The characters in 'Nemo' are voiced by some  of the most famous actors of our time.

The sea creatures in "Finding Nemo" are some of the most lovable animated characters ever to be produced. This was, of course, the aim of the filmmakers at Pixar Animation Studios -- but it wasn't easy to pull off.

"One of our first priorities was to make the fish seem appealing," says writer and director Andrew Stanton. "Fish are slimy, scaly things, and we wanted the audience to love our characters. One way to make them more attractive was to make them luminous. We ultimately came up with three kinds of fish -- gummy, velvety, and metallic. The gummy variety, which includes Marlin and Nemo, has a density and warmth to it. We used backlighting and rim lights to add to their appeal and take the focus off their scaly surface quality. The velvety category, which includes Dory, has a soft texture to it. The metallic group was more of the typical scaly fish. We used this for the schools of fish."

Here's a look at the main characters in "Finding Nemo":

There's no character more appealing than adorable little Nemo, an adventurous young clownfish looking forward to his first day at school with friends Pearl (an unusual Flapjack Octopus), Tad (a Yellow Longnose Butterflyfish), and Sheldon (a seahorse). But he feels his curious spirit is being suffocated by his dad's overprotective rules. Unwilling to be held back any longer, he stubbornly explores a deeper, more dangerous area past the drop-off and gets into trouble that threatens to permanently separate him from home. He vows to escape his capture and return home to apologize to his dad.

Nemo is voiced by Alexander Gould (who was nine years old when he "played" Nemo and has been acting since the age of two, with credits including "Ally McBeal," "Malcolm in the Middle," and "Boomtown"). Since voicing Nemo, he has also acted as the voice of Bambi in 2006's "Bambi II" and played Twitch in "How to Eat Fried Worms," and he currently has a role in the Showtime TV series "Weeds."

"Alexander Gould brought a genuine, untainted quality to the voice of Nemo," recalls Stanton. "It's amazing how many kids sound prepped or have some preconceived notion of what a good actor should sound like. Alex sounded real, and he totally understood direction. We were really lucky to find him."

Nemo's name is a reference to the fictional Captain Nemo of "20,000 Leagues Under the Sea." Ditzy Dory has never read the book, apparently, as she forgetfully refers to Nemo as Fabio, Elmo, Bingo, Chico, and Harpo. The way Nemo sounds tells a lot about his character. "One of my favorite sounds was the one we came up with for Nemo's damaged fin," says sound designer Gary Rydstrom. "It has a little flutter almost like a wing flap. I created a very simple flapping sound with a paper towel. There's almost a hummingbird quality to it."

A widower, Marlin the clown fish lost his wife Coral and 400 children of his children in a predator attack on the outer edge of their safe reef. Now responsible for his only remaining son, Nemo, Marlin is neurotically overprotective and must overcome his own fears to save his son, and learn to let him go his own way.

A typical Marlin line: "The drop-off? They're going to the drop-off? What are you, insane? Why don't we just fry them up now and serve them with chips?"

As Bruce the shark says, "For a clown fish, he's not that funny." Though Marlin likes to crack bad jokes, he's a real pro at worrying, and his fear of losing his son to the dangers of the undersea world is almost more than he can take.

Acclaimed actor/director/comedian Albert Brooks lends his vocal talents and comedic timing to Marlin. Not used to acting alone for animated film recordings, Brooks didn't enjoy the process much -- but he loved his character.

Says Stanton, "With Albert Brooks, you get more than a voice -- you get an established persona. He always knows how to maximize the entertainment value of any moment. Even when his character wasn't asked to be funny in a scene, he knew exactly how to play it for entertainment. At the recording sessions, he would bring his own sensibilities to the material and just kind of run with it. We learned to just start the tape rolling and give it a tail slate at the end. We didn't want to interrupt his creative flow. He would just get these ideas and go again and again. He's such a hard worker and very eager to please."

Here's how Dory introduces herself to Marlin: "I suffer from short-term memory loss. It runs in my family... At least I think it does... Where are they?"

Emmy-winning comedian Ellen DeGeneres gives a memorable and engaging performance as the vacillating voice of the eternally optimistic blue tang Dory, who just swims absent-mindedly through life and has a good time. After meeting Marlin, she's tremendously sympathetic about his predicament, so she offers to help find Nemo. The companions travel a great distance, encountering various dangerous sea creatures such as sharks and jellyfish, in order to rescue Nemo from the dentist office tank.

Ellen jokes that she had to research the part since she's not a fish. "To make sure that I played Dory as a believable character, I wanted to remain faithful to the realism of aquatic life," she says. "Since I found it difficult to breathe underwater, it was a tough research challenge. But after living with a school of fish for a few months, I discovered that they apparently learned nothing at all in school and had nothing intelligent to say. So we had a lot in common."

"Ellen DeGeneres was someone I wanted for the role from the start," adds Stanton. "Even before the character was named Dory, I knew I needed someone to help Father find his son. In the middle of thinking about this character one evening, my wife was watching the 'Ellen' show on TV, and I could hear her doing her schtick of changing her mind five times before a sentence finishes. Usually I don't like to trap myself into writing specifically to a character, but this seemed like such a good match that I decided to go with my gut and hope the planets would align. I called Ellen up to see if she might be interested, and I basically told her that I had written the part for her and that I'd be in trouble if she didn't take it. She was so nice and she said, 'Well then I'd better take it.' She brought a real kindness and gentleness to the part, along with the rhythm and the quirkiness. Both she and Albert have a way of saying things that are unique to them."

Bruce, Anchor, and Chum (the Sharks)

The three sharks reciting their pledge (and satirizing the PETA motto): "I am a nice shark, not a mindless eating machine. If I am to change this image, I must first change myself. Fish are friends, not food."

Adding bite to the voices of the (mostly) reformed meat-eating sharks Bruce the Great White, Anchor the Hammerhead, and Chum the Mako are Barry Humphries (Dame Edna), Australian actor/comedian Eric Bana ("The Hulk"), and New Zealander Bruce Spence ("Mad Max"). They look after Nemo and his friends, and bring them to their private submarine clubhouse.

Background sound effects were used to enhance the menacing personalities of the sharks. "I used a device where I could modulate real sounds with my voice," says sound designer Gary Rydstrom. "I took real water sounds of various types and growled into a microphone so that my vocal characteristics would shape the river-gurgle sound or whatever we happened to be using. This gave a deep, scary feeling to their water movement. If you listen carefully during the shark chase, the water sounds are saying, 'Nemo.' It's kind of my own subliminal Beatles trick."

Gill and the Tank Gang

Nemo's scuba-diving fishnappers take him to a Sydney, Australia, dentist office and dump him in a fish tank. There he meets a school of misfit fish, and together they concoct a scheme to escape back to the ocean before one of them becomes the new pet of the dentist's scary niece.

"Fish aren't meant to be in a box, kid. It does things to them." That's how Gill introduces Nemo to the realities of life in a fish tank. Played by Oscar-nominee Willem Dafoe ("Platoon" and "Shadow of the Vampire"), Gill is the brooding leader of the tank gang who takes newcomer Nemo under his fin. Allison Janney (a three-time Emmy Award winner for "West Wing") does a turn as the astute starfish Peach. Brad Garrett (an Emmy Award-winning actor on "Everybody Loves Raymond") voices Bloat, a blowfish with a tendency for emotional as well as literal blow-ups. Stephen Root ("King of the Hill") is heard as Bubbles, the bubble-obsessed yellow tang. Vicki Lewis ("News Radio") lends voice to Deb (and Flo), a reflective black-and-white humbug damsel fish with an identity crisis.

Bringing the right blend of panic and desperation to Gurgle, a royal gramma fish whose fear of germs makes him a royal pain, is film and stage veteran Austin Pendleton. Top Pixar storyman Joe Ranft (who has previously voiced Wheezy, the lonely squeak-toy penguin in "Toy Story 2," and Heimlich, the jolly German caterpillar in "A Bug's Life") adds to his vocal repertoire with his role as Jacques, a fastidious cleaner shrimp who loves to muck about. Academy Award-winning actor Geoffrey Rush ("Shine") winged it as the gossipy pelican Nigel.

The "Finding Nemo" characters wouldn't have come off nearly as well if not for their splendid settings. In the next section, we offer insights into how their watery world was created.