A Great Day for Sledding 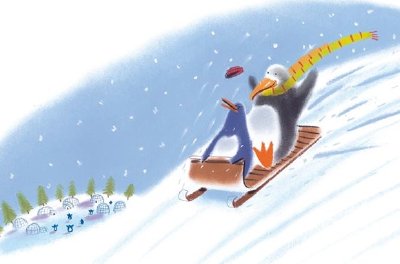 Petie finally let go of his fear and had fun sledding down the big hill with his brother.

New snow! New snow!" Petie sang. "We have new snow today." Petie Penguin was so excited he could not sit still. He danced around the kitchen table. His brother, Percy, was excited, too. "Hurry, Percy! Let's go play in the new snow!" Petie cried.

Percy wrapped his scarf tightly around his neck. Then he helped his younger brother put his winter hat snugly on his head. "Are you ready, Petie?" asked Percy. Petie nodded. "I sure am, Percy!" "Then let's go!" said Percy. "This is a great day for sledding down the big hill!"

Petie and Percy Penguin began the long climb up the big hill, pulling their sled behind them. Up and up they went, much higher than Petie had ever been before. Petie began to worry. "Uh, maybe we should stop and build snow penguins," he suggested.

Percy and Petie kept climbing up. "This sure is a big hill," Petie said with a gulp. A moment later Petie said, "Maybe it's too cold up here for sledding." Percy put his flipper around Petie's shoulders. "Don't be scared," Percy said. "We will ride down together."

Percy and Petie Penguin got to the top of the big hill. Petie got on the sled and squeezed his eyes shut. Percy got on and pushed off. Percy and Petie went flying down the big hill. Petie's eyes popped open. It was wonderful! So fast. So cold. So white. "It is a great day for sledding," Petie said with a laugh when they got to the bottom of the hill. And Percy replied, "It's a great day for having a brother, too!"

Continue to the final story in our Winter Stories collection to find out what lies beneath the melting snow -- and the unlikely subject that discovers it. A Snowy Surprise awaits!

Still snowed in? For more winter stories, try these: