How to Cut the Apron Strings Before the Honeymoon 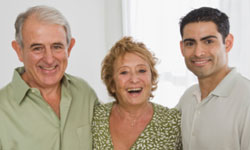 A close relationship with Mom and Dad doesn't have to spell doom.
Jupiterimages/Getty Images

As the mother of two handsome, brilliant and otherwise perfect young boys, my instinct is to reject the premise of this article outright. After all, I grew these kids in my body, delivered them and currently worry about, encourage and love them every day of their lives.

However, my status as a happily married woman also helps me appreciate the importance of independent, grown-up relationships where Mama might not always know best, or doesn't need to be consulted at every turn. Those of you lucky enough to have positive relationships with your parents need not fret about life post-wedding. You can still maintain emotional ties to them, but it's time for you and your new husband to stretch your proverbial wings and learn to stand on your own two feet.

Read on for handy tips on how you can rightfully claim your place as the main woman in your man's life in the classiest, most sensitive way possible. Whatever you do, don't alienate your mother-in-law. She's likely to be the best human reference manual when it comes to your man (plus, you'll want her to babysit when you have kids).

To Phone or Not to Phone

A guy who checks in with his mother once or twice a week is clearly a keeper. He respects the woman who gave him life, but he isn't so attached that he requires her opinion to select a movie at the local Redbox.

If you suspect that your man and his mother have an unhealthy phone relationship, consider keeping an informal "Mommy Phone Log" to track their convos. Five minutes every morning is one thing, but an hour or two every evening is a totally different story, especially if it regularly cuts in one your one-on-one time. Once you have a better idea of how often they talk to each other, consider any extenuating circumstances. Is she going through a rough time, like a family crisis, illness or the loss of her husband? If so, back off on your quest for independence until things settle down; she probably needs her son's support more than ever right now.

If everything's hunky-dory, though, it's probably time to politely suggest that he taper back on his phone time. Try not to sound jealous or resentful when you make the request. Simply let him know that you both work hard all day, so you look forward spending your free time building a marriage and life with him, not listening to him re-hash last night's episode of "Survivor" with his mother.

You're a Sounding Board, Too

You know how you have one friend who's a good shopping partner, another who likes to go out and drink margaritas, and one who's your go-to workout buddy? Guys like a less complicated support system -- why not look for one person to meet all those needs? And perhaps your fiancé's mother is his go-to confidante for everything from work-related issues to his personal insecurities.

He's not slighting you on purpose; it's just that a good mother knows how to make everything all better. Remind him that you want to be the one he comes to with his problems, particularly those that impact your day-to-day lives. If he's sensitive enough, he'll probably suspect that you're feeling left out, and he'll be more inclined to let you into the fold the next time he has something to talk about.

Many couples take up an activity or hobby that they can enjoy together as a way of building a stronger bond. If you're athletic, you might enjoy training for triathlons with your other half, or if you're the bookish type, read the same novel and form a private book club to discuss characters and plot points. 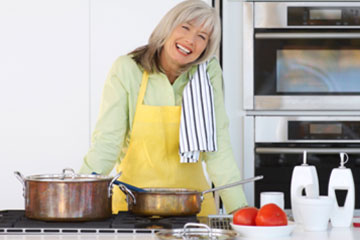 Cook like Mama, and you'll gain some clout.
LWA/Getty Images

Even though you're clearly in love and excited about building a future together, sometimes all that newness can be pretty daunting.

Take the edge off of the familial separation by consulting your groom's mom for a selection of his favorite recipes and treats. She'll appreciate that you admire her cooking, and he's sure to be thrilled that he no longer has to wait for a weekend visit home to enjoy his beloved dishes.

Of course, don't be afraid to make your mark on these old favorites by selecting different side dishes or a complementary beer or bottle of wine. Pepper these meals among your own creations, and it'll be no time at all before your meals make your new space feel as much like home to him as his mom's place.

If your betrothed has siblings who you're comfortable navigating sticky subject matter with, consider them valuable sources of insider intelligence. They'll know (or at least suspect) why your man's relationship with his mother is so involved. Brothers and sisters can be a gold mine of information. And you don't have to put them on the spot by asking why your guy can't seem to let go -- just ask questions about the mother/son dynamic in the family, and you're likely to learn a lot. Finding out that the man in question breast-fed until age 5 is possibly all the explanation you'll ever want or need!

When you're dealing with in-laws, remember the two Ds: diplomacy and delicacy. Forge strong alliances with siblings, and choose your words carefully.

Take a Big Step as a Couple 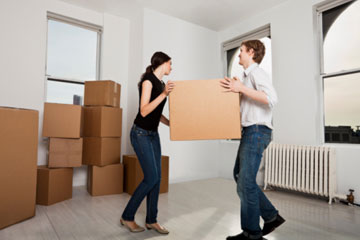 Buying or even renting a new place you pick yourselves is one way to grow closer.
Nisian Hughes/Getty Images

You can play house all you want, but nothing brings a couple together like a major financial commitment. If it's in your budget, look into purchasing a home together. It's a long, involved process that will require you both to closely examine personal preferences, make compromises and secure joint financing. If that's not possible, perhaps another major purchase, like some new furniture or even stocks, will help you feel more financially and emotionally independent from your in-laws.

Whatever you decide to invest in, it'll give you the opportunity to research, discuss your options and make decisions as a unified couple. When he picks up the phone to get Mom's opinion, remind him that the decision is yours to make as a twosome, not an affair for the entire family. Since his mother loves and supports him unconditionally, remind him that she'll undoubtedly adore the choices the two of you make together.

Being married to a man who is both a very beloved son and also the baby of the family hasn't exactly been a walk in the park for Ellen* (whose name we've changed to save her from her screeching phone calls from her mother-in-law). In fact, every major decision or purchase has been a learning experience.

"I think it shocks his family that we make decisions like buying a home or taking a vacation without getting their input," said Ellen, who has a much more laid-back relationship with her own parents. "For me, the shock factor is kind of funny."

Married for a few years now, Ellen and her hubs have taken baby steps in the journey to independence, often choosing to demonstrate, rather than verbally explain their capabilities as a couple.

"Proving myself in some way -- whether it's through an event I've planned or a dinner I've hosted demonstrates that we're mature and doing just fine on our own," Ellen said.

Despite her strong attachment to her baby boy, Ellen's mother-in-law has loosened up a little since she's been able to witness firsthand her daughter-in law's devotion to her son. With any luck and some flexibility from all parties involved, your family can hopefully evolve to a place where everyone feels loved and attended to, preferably before your silver anniversary!

How to Deal with a Disappointing Maid of Honor
What are the mother of the bride's responsibilities?
10 Registry Dos and Don'ts