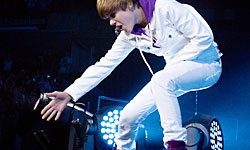 The first decade of the new millennium brought with it many adjustments to men's fashion. The decade started slow, with several carryovers from the '90s (most notably baggy jeans), but, like the 1960s, color came back into the mainstream. Indigos, browns and blacks and were replaced by vibrant, shiny shades of almost any color, including pink.

Large hooded sweatshirt ("hoodies") remained popular, as did trucker hats, which are mesh and foam baseball caps designed to appear low-budget and blue-collar.

In the latter half of the decade, skinny jeans (imagine the tightness of '80s spandex combined with denim) and classically styled high-top sneakers such as Converse Chuck Taylor and PF Flyer shoes became the height of men's casual attire.