by Dave Roos May 12, 2017
Lady Gaga stunned in this blue Valentino gown at the 76th Annual Golden Globe Awards on Jan. 6, 2019 in Beverly Hills, California. Photo by Frazer Harrison/Getty Images

The popularity of award-show fashion has practically eclipsed the award shows themselves. For the 2017 Oscars, the E! Network devoted an entire broadcast day to the red carpet, starting with a morning "pre-pre-show" called "Countdown to the Red Carpet" followed by the hours-long "Live from the Red Carpet" with Ryan Seacrest.

For designers, the red carpet is one of the most visible and buzzed-about ways to promote their brands. In fact, some top designers will pay A-list actresses and musicians big bucks to wear their dress or jewelry — between $100,000 and $250,000 depending on the star power of the celebrity.

Nicole Kidman arrives at the 2011 Oscars in a dress by John Galliano.
Dan MacMedan/WireImage/Getty Images

Other celebrities are allowed to "borrow" a designer dress, handbag or diamond-studded necklace for the night — for free of course — in order to get the designer's name in the highly clickable red carpet photo slideshows.

But what happens to that very expensive dress when the red carpet is rolled up and the TV cameras move on to the next event? Is the gown stuffed into a closet never to be worn again, or does the designer take it down to the dry cleaner and try to sell it on Craigslist?

We reached out to Ariana Weisner, a Hollywood stylist, for some answers. Weisner, who dresses celebrities for award shows, press tours and magazine spreads, says that 100 percent of the dresses loaned out for award shows go right back to the designer. OK, 99.99 percent.

"On rare occasions, the designer will gift the celebrity the gown," says Weisner, the most famous example being the plunging green Versace dress that Jennifer Lopez wore to the 2000 Grammys. "Versace gifted her the dress, because it was such an iconic moment." According to Glamour magazine, the barely there dress is still in JLo's closet.

The really big design houses like Dior, Louis Vuitton and Chanel will take back a red-carpet dress and keep it in their archives, says Weisner. You won't see a "statement" gown from the Oscars resold to the public, dry-cleaned or not. But that's not the case for lower-tier designers.

Weisner cites the rise of fashion rental companies in Los Angeles and New York for this trend. Less conspicuous red-carpet dresses from "whatever designers" (Weisner's term) could very well end up on the racks of shops like Armarium or Rent the Runway a few years after a big event.

Sample sales are another place where you might stumble upon a dress that a celebrity wore for one big night. When a designer's warehouse becomes overstuffed with leftovers from last year's line, and sample-sized dresses that were tried on repeatedly in the store, they hold a sample sale.

"Sometimes you can get a dress from a sample sale that a celebrity has worn in the past," says Weisner. "They're usually pretty cheap, too, because it's already been used."

Even if you can't get the very same dress that a celeb wore on the red carpet, you might be able to buy an exact replica. Every once in a while, says Weisner, a dress that really pops at an award show is picked up for mass production. One example is a silver stunner that Kate Hudson wore to the 2016 Vanity Fair Oscars post-party. The designer sells the same dress online for "only" $3,325.

Actress Kate Hudson arrives at the 2016 Vanity Fair Oscar Party. The dress's designer made a version of it for sale to the public.
John Shearer/Getty Images

Really luxurious dresses not only grab the attention of E! viewers, but also thieves. At the 2015 Oscars, actress Lupita Nyong'o wore a white gown by Calvin Klein studded with 6,000 pearls worth an estimated $150,000. The gown was reported stolen from Nyong'o's Los Angeles hotel the day after the Oscars, but was then mysteriously "returned" by the thief.

According to TMZ, after the dress burglar snatched the gown, he removed two pearls and took them down to the garment district. They were fakes! The thief dumped the "worthless" dress in a bathroom back at Nyong'o's hotel and tipped off TMZ to its location.

How the Ladybug Folds Its Giant Wings 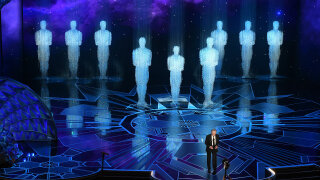 How the Oscars Work 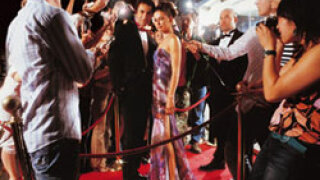 10 Ideas for a Red Carpet Event 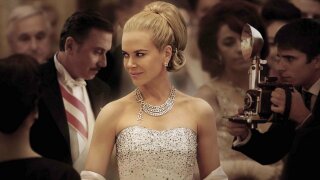