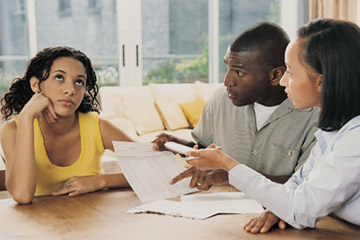 It seems like just yesterday that your little girl wanted you to volunteer at school and help with her teams or clubs. Your sweet son used to come to you trustingly with all sorts of questions. Family outings were happy occasions.

So, what happened? What's with all the eye-rolling and sarcastic remarks all of a sudden? Why does your child cringe if you offer to chaperone the school dance? Why does he run ahead at the mall so that he won't be seen with you? Why does she seem to think nearly everything you do is uncool?

Adolescence has struck. The child who found you indispensable for the first decade of his or her life now seems to think you're a loser. Just ask the kid and you'll hear it for yourself: You don't know anything. You're embarrassing. You like all the wrong things. You act dumb. You look wrong. And on and on.

Odds are, you haven't changed at all. But during that difficult period between childhood and the later teen years, changes nearly overwhelm a so-called "tween." The tween phase roughly corresponds with middle school. It may set in when your child is only 8 or 9 years old, but it may last into the early teenage years.

It's normal for a tween to think parents are losers and to act embarrassed by them. That's part of the emotional turmoil they need to mature properly. Tweens are trying (often without knowing it) to separate themselves from their parents and establish their own identity. They care more about the opinions of their peers than those of their parents. Often, they seem to reject their family's values and ways of doing things as they try to figure it out their own. They may be moving toward adulthood, but they're still children and lack perspective. They may think that everything you do is hopelessly outdated. But even as they push for independence, they're afraid of losing the safety of family. Your child may even call you a loser to put the blame on you for something he or she doesn't want to do.

Your child may be just as confused as you are about what's going on. But don't expect your kid to admit that!

Although this is normal behavior for most tweens, it's not fun for the parent who's constantly being criticized. Read on for tips on making the relationship more bearable.

What Makes You a Loser to Your Tween?

When your tween calls you a loser, it might be a sign that the child worries about being considered a loser as well. Tweens desperately want their peers to like and approve of them. They may fear that if their parents stand out, their friends will hold it against them. They may compare you to their friends' parents and think that you're noticeably different -- older, younger, single, married, clunky car, strange hobbies -- and different equals bad at this age. Remember that kids can be cruel to one another. They're quick to point out and make fun of mistakes or anything that doesn't conform to the norm.

It doesn't help that many movies, TV shows and books depict parents as clueless and bumbling. Even if you're a perfectly competent adult, your tween may think you're a loser. It's all part of what enables him to become a mature individual.

There are things you can do to make life more pleasant, however.

Keep reading for lots for information on parenting tweens.