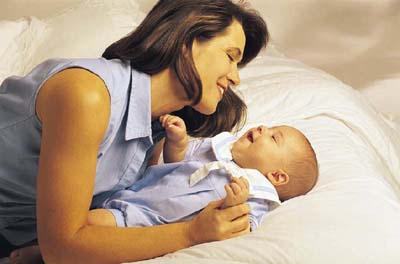 The bond you form with your children may affect the relationships they make as a adults.
©2006 Publications International, Ltd.

Given the opportunity, parents and babies naturally form a strong relationship with each other. This relationship is often called the parent-infant bond. For the parent, this bond is woven of love and responsibility. For the infant, it is his first -- and perhaps most important -- relationship.

Psychoanalysts have theorized that the first love relationship a baby experiences with a parent sets the stage for all later interpersonal relationships. They contend that if you don't have this necessary parent-child relationship in your formative years, you won't be able to love as an adult. A number of psychologists and psychiatrists have found support for this view. For example, John Bowlby, a British psychoanalyst, studied children growing up without parents in the first years of life; he found that these children often had problems relating with others and forming bonds later in life. From such studies, psychologists have confirmed what most parents knew all along -- how important sensitive, responsive, and consistent parenting is to child development.

However, it is also important to point out that babies may not have to be with their parents all the time, despite the emphasis in Lamaze classes and parents' magazines that there is a critical period for parents to bond with their babies. Supporters of this position state that parents who are separated from their newborns after birth have difficulty forming that essential parent-infant bond. Citing studies conducted with animals, they point out that mother mice often refuse to care for their young if they are separated right after birth.

Fortunately, humans are not mice, and more recent research suggests human mothers generally are quite able to be loving mothers even if they must be separated from their babies as a result of prematurity, illness, or other reasons.

Nonetheless, positive changes among health care providers have occurred because of recent recognition of the process of bonding. Many hospitals have dramatically humanized the way in which parents and babies are treated. Parents are allowed greater contact with babies, particularly in intensive care nurseries. There, parents can now often participate in the feeding, handling, and general care of their babies right away, instead of waiting until their infants are released from the hospital.

Naturally, this bond will change as your child grows and develops. Over the course of the following sections we will document the stages of growth that your child will go through until the age of three. In the next section, we will begin with birth through two months.