How to Politely Request an Item as an Heirloom 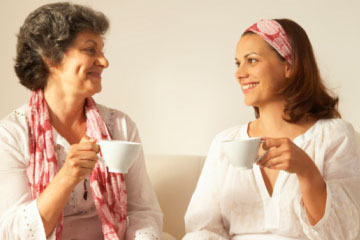 You may be more comfortable asking for an heirloom if you can do it in person during a heartfelt conversation.
Photodisc/Thinkstock

Asking for a family heirloom is one of the most delicate questions that you can pose to an aging relative. After all, the question implies that you're already contemplating a time when he or she isn't around. And no matter how pure your motives may be, it's hard not to sound greedy.

Maybe this is why so many of us never get around to expressing our desire for certain items we'd like to inherit. But difficult as the question may be, the alternative to asking may be far worse. If you don't inherit what you want, you may stew with resentment for years. It's not uncommon for family members to become deeply estranged over the distribution of a family estate.

So, put aside your qualms and muster up the courage to ask for the antique diamond ring that's shimmering on your grandma's finger. She may say no, but at least you'll have asked. Read on to find out how to make the dreaded bequest request with care and tact.

The first thing you should decide is how to ask the question. Should you call, send a letter or e-mail, or try to discuss the matter face-to-face? If you're on the phone with your mother all the time, then maybe a call is the best mode for broaching the subject with her. On the other hand, bringing it up when you're having a heart-to-heart over tea is appealing because you can more easily gauge her reaction and respond accordingly.

One advantage to posing the question in a letter or e-mail is that there will be a record of the request and (hopefully) a corresponding record of the response. Those records might come in handy later on if there's any confusion about the will.

Each mode has its pros and cons, and whichever you choose also depends on how you and your relative communicate best. Be sure to consider the matter carefully before you actually ask the question.

The next thing to think about is timing. Some people remain sharp as a bell right up until their final breaths, but many don't. Alzheimer's disease and dementia claim the minds of far too many elderly relatives, and for this reason -- if for no other -- the right time to ask for the heirloom you hope to inherit is as soon as possible. It's better to risk being indelicate early on than to muster up the courage when it's too late. In fact, the earlier you pose the question, the more easily the conversation may go. Since the inevitable sad day will be that much further in the future, the conversation may be less emotional.

Above all, the most important element to consider is your approach to asking the difficult question. Make sure to clarify why the object you're asking for is so important to you. Call upon your memories to create a narrative that your relative can easily understand. For instance, tell your mother how you recall watching her write letters and cards at her desk and how you couldn't wait to be big enough to sit there, too. From there, tell her how you look forward to carrying on the tradition of using the desk for letter-writing and then passing it on down to your own children. Share with her your fears of what might happen to the desk if it were to go to someone else for whom it doesn't hold the same meaning. If it's a valuable antique, explain that you're worried it will be sold and lost to the family forever.

Once you've made sure that your relative understands how much the heirloom means to you, it's up to him or her to decide what to do. The important thing is that you won't regret never having made your request. 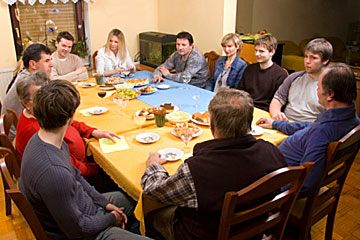 A family meeting is the perfect forum for a discussion about dividing up heirlooms.
iStockphoto/Thinkstock

So, what happens if you never got a chance to request the heirloom you wanted before your relative died? If a will exists that clearly spells out exactly which objects go to whom, then unless you want to spend time in probate court, it's best to abide by the wishes expressed therein.

But if the relative didn't leave a will or was vague about the distribution of his or her estate, how do you go about making your wishes clear? In general, it's best to get everything out in the open as quickly and clearly as possible. To do this, try to arrange a meeting of all possible legatees. In this forum, everybody can express their wishes and the matter can be fully discussed. If such a meeting can't be arranged, try circulating an open letter in which you explain how you feel about the object in question and solicit the opinions of the rest of your family.

Whatever mode you choose, make sure to communicate as clearly and as openly as possible with everybody concerned. This should help avoid those dreaded family squabbles in which people pick sides and hold grudges for decades.

Sometimes dementia or Alzheimer's disease descend quickly and unexpectedly, and in the flurry of health-care related decisions that follow, the question of who inherits what is forgotten or considered too trivial to address. In this case, how do you ask somebody who is non compos mentis ("not of sound mind") for a beloved heirloom?

Even extremely forgetful people have moments of lucidity. Sometimes those moments tend to occur at a certain time of day. Try to choose one of those moments to pose your question, and when you do, bring along another family member who can bear witness to the answer. Even better, bring a family member and a recording device to have an objective record of your conversation. Pose the question gently, and try not to get frustrated if the conversation doesn't go the way you'd hoped.

It's extremely important not to trick your relative into giving you the answer you want. Besides the fact that it's unethical to take advantage of a person in this state, it will also create bitterness within your family.

In the end, it may be up to you and your family to make those decisions about inheritance after all. And, when all is said and done, if you don't get the beloved object that you wanted, keep in mind that you still have your memories of your relative, and those are most valuable heirlooms of all.