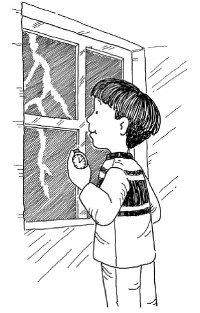 Whether they're learning about lightning or investigating a rainstorm, your kids will enjoy these fun activities. They'll also get a better understanding of bad weather in the bargain.

Kids will learn to tell how far away lightning strikes are in this thrilling activity.

What really happens outdoors during a downpour? Find out here!

Understand the relationship between light and sound by studying lightning and thunder -- keep reading to learn more!

For more crafts and activities, try:

Have a stopwatch handy to measure how far lightning is from you.
©2007 Publications International, Ltd.

It doesn't take a weather forecaster to calculate how far away lightning is. Try this natural math activity and let kids see for themselves.

Where there is lightning, there is thunder. Since light travels faster than sound, you see the flash before you hear the sound. You can use the thunder to figure out how far away the lightning is.

Watch for a flash of lightning. When you see it, use a stopwatch or second hand to count the seconds between the flash and the thunder that follows it.

Write down the number of seconds, and divide that number by five.The answer tells you how far away from you the lightning was in miles.

Did you know that not all lightning bolts touch the earth? In fact, two-thirds of all lightning occurs between clouds or within the same cloud.

But that doesn't mean it's safe to go out in a thunderstorm! During a storm, avoid tall objects (like trees) and don't touch anything metal.

You s­hould also stay away from electrical appliances, telephones, and water until the storm is over.

Discover what happens to the world outside when the rain starts to pour on our next page.

You'll see nature in a whole new way when you take a walk outside in rainy or snowy weather. Try this bad weather activity and see for yourself.

Most people make it a point to stay inside when the weather is "bad." And most of the time, that's probably the best thing to do. But it can be interesting to go outdoors when it's rainy, snowy, foggy, or whatever. (Never go outside in a thunderstorm, snowstorm, or hailstorm. Severe weather can be dangerous.)

Look for the birds and animals you usually see. How do they adapt to rain and snow? How are plants affected? Also, pay attention to what happens in nature after the rainy or snowy weather passes.

What do animals do then? How do plants react? How does the sky look?

For more crafts and activities, try: