The makers of Altoids, the "curiously string mint" from England, probably never imagined that their signature tin would cause such a stir so many years later. At the time, many products were packaged in small metal cases. The difference with Altoids is that it stayed in business and it refused to make the move to plastic. The tin became iconic in its own right, a packaging success not realized by many companies. Over the years, people decided that the empty tin made a pretty good small storage container. What Altoids customer hasn't ended up with a tin full of spare buttons or loose change at some point?

Then there are some people who take the use of the tin to the next level. Altoids likes to call these folks "tinnovators" and for good reason. The electronics enthusiasts and artists have turned Altoids tins into belt buckles, iPod speakers, shadow boxes and even fine art. Basically the only thing limiting what you can do with an Altoids tin is your imagination and size of the project. That's the beauty of any tinnovation: It's all housed in a two by three inch (5- by 7.6-centimeter) metal box. This means that projects take hours and days instead of weeks and months. It's also a pretty green hobby, with every repurposed Altoids tin avoiding the bottom of a landfill or even a recycling bin. After all, reuse is second in line in the battle cry of the green-centric, ahead of recycle and behind reduce.

Nick Brenn is a teenager from southeastern Pennsylvania who has been working with Altoids tins since 2006. There are a couple of broad categories when it comes to tinnovation -- artists and inventors. Nick falls into the latter category, a young entrepreneur with an interest in electronics. He's worked with Altoids tins in several ways, but his specialty is the Altoids tin flashlight. 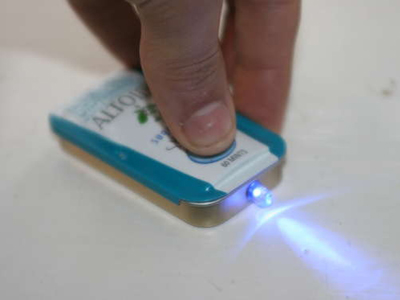