How to Make a Shadow Box from an Altoids Tin 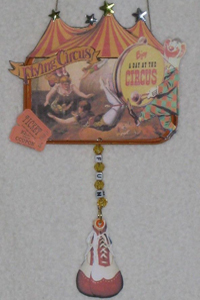 Classic oil-painted canvas may be what many people think of when they think of art, but it comes in all shapes and sizes, and artists can use a range of materials for their medium. Sculptors use clay, metal, wood, plastic, glass or stone, just to name a few. Major art installations can take up city blocks. In the case of the Guggenheim Museum in New York, the building itself, designed by architect Frank Lloyd Wright, is part of the art. Some artists only work with shadow and light, bounced off a white wall. You can't leave out the sketch pad, performance art, murals or graffiti art. And this is only the tip of the art iceberg.

There's another kind of artist that uses found or acquired objects as inspiration. An old television set is repurposed and becomes a piece of artwork; discarded soda bottles are configured to form a giant mosaic. Another name for this kind of art is "altered or recycled" art. This is what Michigan artist Karen Burene calls her unique style of art. Burene, under her Chaotic Artworks banner, uses discarded Altoids breath mint tins to make small shadow boxes. Shadow boxes can mean a couple of things. Many shadow boxes are shallow wooden squares that are used to protect and display something -- military metals, flags, keepsakes and the like. Shadow boxes can also showcase art, and are actually part of the piece. If you remember back to elementary school, you probably made a shadow box or two in art class using a shoe box to depict a scene. These beauties were usually made with crayons, paper and a few dozen stray pieces of dry macaroni.

Burene's Altoids tin shadow boxes fall into the art category. She sells her tiny pieces online, but after HowStuffWorks interviewed her for this article, it's clear that hers is a labor of love. Online sales allow her to keep the operation small and fun, and she's now a part of a larger group of "tinnovators" who repurpose Altoids tins into everything from belt buckles to custom pill boxes. As it turns out, the tin for the "curiously strong mint" has something of a cult following. Even non-artists tend to save the small metal tins, mainly because of their usefulness. As Burene puts it, "They're sturdy and the perfect size for storing small items. That makes them difficult to throw away."

Karen Burene is originally from Flint, Mich., but now resides in the suburbs south of the city. She, like many children, got her first craving for art in class at school, working with paper, cardboard, chalk, markers, glue and yes, dried macaroni. Coming from a creative household didn't hurt either. Her immediate and extended family took part in everything from poetry and metalwork to music and painting. These early days definitely served as creative inspiration. In altered and assembled art, Burene found a medium that recalled her school art classes, and one that allowed her to dive right in as a self-taught artist.

She was originally inspired to become a tinnovator after seeing some other Altoids tin artwork in online blogs. Like many crafters, she took an "I can do that" attitude and got to work creating her own version of the Altoids shadow box. Burene draws much of her inspiration from the ocean, which is evident in her artwork. Her very first box was a mermaid scene that used real seashells and starfish. She's also worked with a Parisian theme with her "Moulin Rouge" shadow box, and some Asian and circus inspired boxes. In the future, she plans to put to good use the small, rusted metal parts she's been collecting for some steam punk-inspired shadow boxes.

Burene uses a variety of materials to create her shadow boxes. The only tools she needs is some needle-nose pliers to remove the tin top, but she uses vintage materials, lace, ribbon, string, wire and any kind of found object she thinks might work. While she does paint some of the tins, the priming and preparation time takes a little too long for her taste. Burene gets around this time consuming task by creatively using fabric and vintage paper products to cover the tins.

In order to make shadow boxes from Altoids tins, there's one material you can't do without -- the tin itself. She gets most of these from buying her own and eating the mints, but she does get some donated from friends and family and occasionally has to purchase the empty tins online. While Burene hasn't hooked up with any other tinnovators yet, she's eager to do so. She keeps up with what's going on in the tinnovation world as a member of two different Altoid art Flickr groups. She draws inspiration from other Altoids artists and pairs it with her own imagination.

While the main reason behind Burene's artwork is for a fun, creative outlet and a good way to make a little money, there is another factor at play -- the environment. The way she sees it, every Altoids tin she can repackage as art is one less piece of metal sitting in a landfill. As the artist herself puts it, "They're just too cool to throw away."