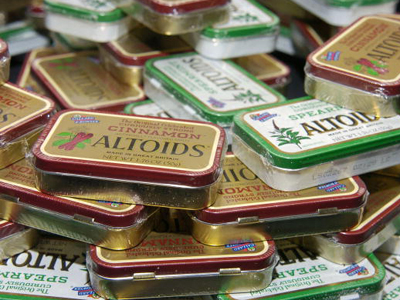 Imagine how many things you could make with this big old pile of Altoids tins.
Wire Images/Getty Images

"Think big, think small," is the advice artist, designer and do-it-yourself editor Kate Pruitt offers to those looking for new ways to tinnovate. Pruitt considers herself a tinnovator after she constructed a series of projects for the do-it-yourself blog she edits on the Design*Sponge Web site.

It wasn't until she had completed the projects that she realized she'd just inadvertently become a member of the subculture of tinnovators -- people who find new and interesting uses for old Altoids tins. "After I finished the projects I went online and that's when I became aware that there's this whole community of people who make things out of Altoids tins," she said in an interview [source: Pruitt].

Tinnovation was an easy step to take for Pruitt. She earned her formal training during the three years she spent as a store display designer. These designers use retail spaces as their palettes, creating artistic visions through choices over the flow of the store, lighting, colors, furniture, installed art and, of course, displays of the items for sale.

Pruitt also says that having an eye for using old, second-hand objects in novel new ways comes in handy for a store display designer. It's this knack that made it so easy for her to traipse into the world of tinnovation, as well as do-it-yourself design. It was in her role as do-it-yourself editor for Design*Sponge that she came across the idea of using Altoids tin for uses other than the intent of their original design, which is, of course, to hold Altoids mints.

Each month, Pruitt constructs a series of four projects using the same material. When she came across a pile of old Altoids tins at a bulk second-hand store, she decided to see what she could do with them. She says she bought the whole lot and took them home to fiddle around with the tins.

In fairly short order, Pruitt came up with the idea of constructing a Zen garden from an Altoids tin. 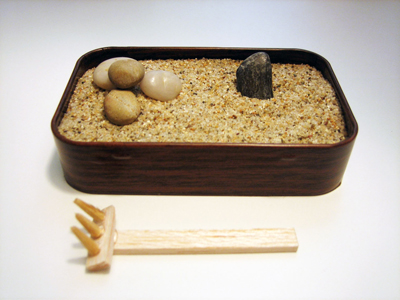 It wasn't too much of a stretch for Kate Pruitt to decide that an old Altoids tin would make an excellent desktop Zen garden. After all, the tins -- at 3.75 inches (9.5 centimeters) long, 2 inches (5 cm) wide and 0.75 inches (1.9 cm) deep -- is similar to the size of factory-made desktop Zen gardens out there for sale [source: Benjamin]. That said, Pruitt's Altoids tin Zen garden stands out for a couple of reasons. First, the artist has a penchant for crisp and soothing design that she shares with her readers. More importantly, the Altoids tin Zen garden she is something of an homage to her mother, who Pruitt says is an devotee of Eastern spirituality.

Pruitt removes the lid by of an empty Altoids tin by unfastening the screws, leaving the base of the tin with the hinges still attached, but flattened with pliers. To add an earthy feel to the garden, she uses faux wood grain contact paper. She says she was inspired by designer Todd Oldham, who tends to favor similarly ironic patterns. "It makes sort of a little kitschy Zen garden," she says [source: Pruitt].

With the contact paper applied, folded over the edges inside the tin and smoothed of wrinkles (except those that form at the corners -- which can't be avoided but can be flattened, Pruitt says), the garden can be filled with sand. Pruitt uses coarse-grain sand, which looks like gravel in a miniature garden. Gravel is a key component of the Karesansui ("dry mountain and water garden") type of Japanese rock garden [source: Bolt].

To simulate the upright boulders that are characteristic of all rock gardens, Pruitt places small stones she's accumulated on family trips over the years to add an even more sentimental touch to the space. Follow the Japanese technique of burying the bottom third of the stones, so they look seated in the garden.

To complete the project, Pruitt constructs a miniature rake. The rake is used in a Zen garden as a way to smooth and ripple the sand, a traditional means toward creating tranquility in the raker. In other words, without the rake you've got a garden with no Zen. She uses a thin strip of balsa wood, cut into a 2-inch (5 cm) length for the rake handle, with a 0.5-inch (1.3 cm) length attached at a slight angle on one end of the handle. The pointed tips of three bamboo barbecue skewers glued to the half-inch strip form the rake's tines.

Fresh breath and tranquility; how can you go wrong?

What can I do with my paper towel tube?
How to Make a Paper Sailor Hat
5 Craft Projects Using Things From Your Yard