Body Chemistry Has Everything to Do with Fragrance 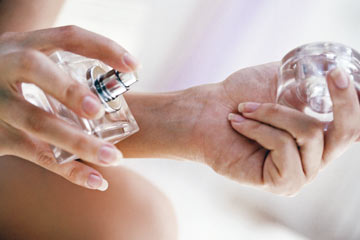 Body chemistry has a major effect on fragrances; what smells great on one person won't necessarily work on another.
Studio MPM/WireImage/Getty Images

Raise your hand if this has happened to you before: You've bought a certain perfume because you admired it on a friend, but then completely hated it when you wore it yourself. Or you loved a fragrance at the store when you spritzed it on a tester card, but then ... didn't like it when you wore it yourself. We've all been there, and many of us have rows of full perfume bottles lined up on our dressers to prove it.

Fragrance isn't something you can impulse-buy, and there are two main reasons for this. One: Because all perfumes are composed of a top note, a middle note and a base note, they change over time -- the top note you noticed when you sprayed that card will totally change as the fragrance evaporates. And two: Your body chemistry has a major effect on a fragrance. What smells heavenly on your friend may not necessarily work for you.

We don't know exactly how or why perfume molecules react with the skin differently on every person, but the body chemistry issue goes a lot deeper than just affecting the way a perfume smells on you. On the next page, we'll talk about a study that revealed a surprising subconscious factor that influences fragrance choices -- and, possibly, your choice of a mate.

When you're shopping for a new perfume, you're probably not consciously searching out a scent that will snare you a new mate. But at the same time, we all know that fragrances are used to attract people. You want others to think you smell good, and of course it would be nice if someone of the opposite sex were attracted by your new perfume. We're all aware of sexy perfume advertising, too. It's not a big secret.

But a 2001 study in the journal "Behavior Ecology" showed that there's lots more going on beneath the surface when you're selecting a new fragrance. Whether you realize it or not, your choice does, in fact, send out a genetic signal that could reel in a suitable mate.

According to the study, people tend to prefer fragrances that -- for whatever reason -- combine with their body chemistry in a way that complements their major histocompatibility complex (MHC). Your MHC involves the genes that make up your immunogenetic profile. People (and other animals) generally pick mates with dissimilar MHCs to give their potential offspring a more genetically diverse -- and thus strong -- immune system.

So, even though you think you're buying that clean, fresh scent or the sexy, musky one just because you enjoy how it smells, what you're actually doing is advertising your immunogenetic profile to potential mates. Might make you think differently the next time you're spraying those cards, huh?

Genetic signals aside, you want to find a fragrance you enjoy -- one that won't languish, unopened, on your dresser. Here's how to do it. Spray different perfumes into the air or onto a card just to smell their top notes. If you like a certain top note, put some on your wrist and sniff it again in 20 minutes (this will give you the middle note). If you like the base note when you smell it an hour later, then go ahead and buy the perfume. Might take up a bit of your time, but you'll definitely waste less money!

Should You Always Bet On Black?
5 Steps to Applying Leg Makeup
10 Accessories for Short Hair