Understanding Cognitive and Social Development in a Newborn 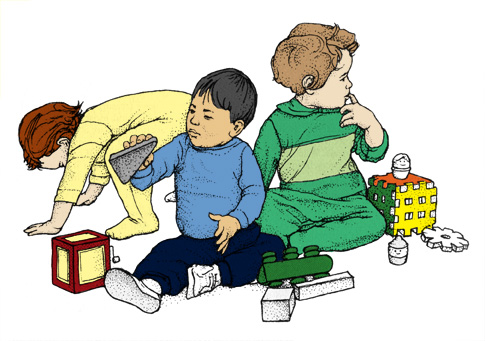 Parallel play is one of the steps on your baby's road to true social interaction.
Publications International, Ltd.

Your baby's social life with his peers begins just as soon as you see to it that he has opportunities to see other babies. You can put two babies in a playpen or on a blanket on the grass at three months old, and if they are both in happy moods, they'll make a picture both families will always treasure. Cooperative play with other children, the kind most adults consider real play, doesn't start until kids are about three years of age, but all children need the companionship of other children long before that. Of course, siblings can make wonderful playmates, but it is important for your baby to be around others who are close to him in age and size, at least occasionally. On this page, we discuss the development of social interactions between your newborn and his peers, including a discussion on play groups and birthday parties.

Finding suitable playmates may or may not be easy, depending upon your neighborhood, your own circle of friends, and your personal inclinations and abilities in making new friends. If there's a public park near you, you may find this fresh air playroom the ideal place both for you and your child to take a break from the home routine. Many lifetime friendships, for both parents and children, have begun in parks. The parents socialize and trade child care tips as their babies doze in carriages; then later they share supervision duties as their children play on park equipment and learn to get along with others.

Some parents who have closely watched the social development of their own or others' children note that play progresses in quite predictable stages. The first stage is not play at all; babies younger than one year old are watchers. They examine their toys and everything they get their hands on very closely, and they stare at other people. You'll probably notice your baby is especially interested in other babies and small children and is well aware they are different from adults.

Parallel play. Toddlers begin what's called parallel play. They play side by side or back to back, paying little or no attention to each other. They like being together, and they may occasionally enjoy watching each other play, but, mostly, each is interested in what he is doing. When your child is about 18 months old, you're likely to see some aggressiveness. Toddlers don't really know how to play yet; they don't understand sharing, and they haven't learned it's not right to hit and shove and bite other people. Use common sense in handling a battle between two toddlers. Of course, you can't stand by and watch a child get hurt, but be careful you don't teach your toddler it's all right to hit others because Mommy will see to it the others don't hit back. And be aware that if you spank your toddler for being overly aggressive, you teach him that the way to stop hitting is to hit.

Associative play. Associative play, in which children really play together, follows soon. This is unstructured play; there are no rules, but two children talk to each other and use some of the same toys. Attention spans and tempers are short, and egos are all-important, so you can't expect the fun to last more than about a half hour in most cases. You'll hear the word "mine" often. If the eyes of two children happen to light on the same toy at the same time, they'll both reach for it. Toddlers of this age really do want everything they see, unselectively. Reason won't solve the problem of contention; these children are not yet old enough to grasp the idea of sharing. You may be able to make use of a timer to set the end of one child's turn and the beginning of the other's, but sometimes you may simply have to put a toy away.

Remember that the quarrels that annoy you because they seem senseless help children develop social skills. If you interfere in any but the most serious disagreements, you deprive the children of a chance to learn how to get along with others. At this point, children almost always do best with just one other child, and they get along better and are able to play longer with one child than with another. It is important now that your child see as many others as possible so he can select the ones with whom he most enjoys playing.

Cooperative play. By about the age of three, your child becomes proficient enough at social relationships to begin cooperative play. This involves rules and sharing and turns and fairness; for example, in playing house, the "mother" must act like a mother; it's not fair for one child to knock down a tower of blocks the two have put up together; your child knows he can't use the swing while it's the playmate's turn. If you have older children, it's at about this point that you begin to see the sibling companionship you've been waiting for. While previously the older kids have probably enjoyed playing with the younger one as a sort of living toy, now little brother or little sister has learned enough to make proper responses in play situations and has become much more interesting. Imaginative role playing, such as playing school, house, and office, is fun for both the older and the younger kids. Parents often worry if they detect signs of shyness in their child. Some shyness is simply the result of a developmental phase; the child soon outgrows it and becomes outgoing and friendly. You can help your shy toddler or preschooler by encouraging non-threatening play with just one or two low-key children, not a crowd of boisterous ones. Be aware some children are simply less gregarious than others, just as some adults are. Don't push too hard.

One way to provide your child with a regular source of playmates of the right age is to form a play group with other parents. It's not too early to start a group when the children of three or four congenial parents who live close to each other have reached the age of 18 months to 2 years. Some parents choose to meet all together, children and adults, once or twice a week. Others prefer to take turns taking charge of the children. This approach makes the play group more like school and gives all the parents some time off. The parent in charge needs to devote total attention to the group to be sure no child gets in trouble, so everything must be ready before a session starts. Sessions should not last longer than two hours. An elaborate array of toys is not necessary; the ones your own child has are probably sufficient. By the time the children are about two years old, the play group may be expanded. Parents will probably then work in shifts of two, and you may arrange for meetings to be held in a public place, such as a school or church.

Your child learns that his birthday is a very special day when you bring out the cake with its single candle and the whole family cheers and sings. A balloon or two, the lighted cake, the singing of "Happy Birthday," the flash of the camera, and a few presents are probably enough to overwhelm all but the most sophisticated of babies. Some parents also like to include a few friends and their children in the celebration. It's best to handle this very simply, perhaps in a park or in the backyard if possible. Ideally, at least one parent should accompany every child. If you have a party at home and you can possibly manage it, provide nap space for exhausted babies.

By the second birthday, your child may have been to a party or two and may have some idea of what to expect. Still, even many three year olds are not yet ready for the full-scale party some parents like to put on. By the preschool and kindergarten years, kids can handle theme parties that involve six to a dozen guests and feature clever decorations and full-meal refreshments, games with prizes, craft-making sessions, and even professional entertainers, such as clowns or magicians. Until then, though, keep parties small and short, and plan simple and noncompetitive activities. Balloons, favors to take home, and the traditional ice cream and cake make as exciting a party as most toddlers can handle. Many excellent books on putting together children's parties are available, with ideas suitable for toddlers and young preschoolers.

It's truly amazing how much a baby learns in his first year. He develops cognitive, language and social skills that he will need throughout the rest of his life. Because developmental delays can presage more serious problems, parents are often concerned whether their child is exhibiting "normal" developmental skills for his age. The information provided in this article can assist you in making determinations about the aptness of your child's developmental skills.