What to Do If You Inherit an Old Car 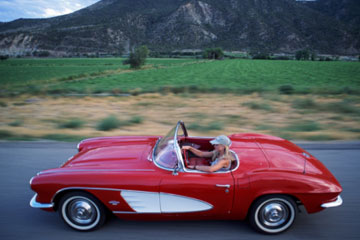 Before you can enjoy the wind in your hair, you'll have to endure the pain of procedures and paperwork.
John Kelly/Getty Images

We've all dreamed about it. An unknown, long-lost relative kicks the bucket and bequeaths you a massive fortune, spacious estate or, in the case of fantasizing gearheads, a sweet, classic ride.

People actually inherit old cars all the time, but the reality isn't often so fantastic. Among cruising through legal jurisdictions, taxes, registration and restoration costs, it can be extraordinarily difficult to take possession of an inherited vehicle, much less hop in it and go for a spin. Even the paperwork pileup most auto-inheritors have to navigate through is enough to make you consider cashing in your pink slip (which, incidentally, is a large pain in the bumper).

However, paperwork and rusted fenders are no reasons to bemoan your inheritance. Regardless if you're the proud new owner of a prestigious classic, or you just want to restore your grandfather's old Buick, we'll act like a top-of-the-line GPS to direct you through the sea of bureaucratic red lights. We'll show you how to handle everything from out-of-state probate to selling the vehicle. And, we'll even tell you what to do if your inherited ride is more horseless carriage than car.

Did you know that many inheritors of old autos hire an attorney to help them secure the vehicle? Find out why on the next page.

So, you've inherited a car -- congratulations! Picking up your ride is going to be more complicated than gassing it up and driving it home. Like weaving through a series of orange cones and demonstrating your parallel parking skills to get your license, taking legal possession of an inherited car is a multipart process.

The most complicated part of the entire process is probate, which is where the deceased's estate is administered to his or her beneficiaries. Although some kinds of assets -- such as jointly-owned property -- can be excluded from the probate process, automobiles, regardless of their value, almost always have to go through probate before the title can be transferred to the beneficiary.

What does this mean for you? First of all, the probate process is probably going to cost you. Federal estate taxes (which are often 45 percent or more for multimillion dollar estates) must be paid before anything else, so Uncle Sam will take his cut before the probate process even begins. However, you're still going to have to pay any and all outstanding debts and fees before you take possession of the title. But don't start brushing up on your local tax laws just yet; the probate process is typically handled in the jurisdiction where the deceased party lived.

Of course, we're assuming that no one's contesting the will. If there's someone else laying claim to your bequeathed car, things are going to get a lot more expensive. Contested wills aren't restricted to the rich and famous. Squabbling siblings, jilted spouses and incensed secret lovers all may lay claim -- and maybe even provide evidence -- that the vehicle left to you isn't rightfully yours.

Unless the car holds important personal sentiment, is exceedingly valuable or signifies the statute of your unfaltering principles, you may just want to let it go. Contested wills can take years to sort through and if you're named the legal beneficiary, you may end up having to sell the car (and more) just to pay off court costs and attorney fees.

That's right -- we said attorney. Regardless if your inheritance is contested, you may want to consider hiring one. The probate process differs by state, but it's almost always complicated. Considering the multitude of formal procedures and paperwork the will's executer must address, you can limit your liability by letting a probate lawyer handle the process. So, unless you're going to be the proud new owner of a decades-old station wagon with 200,000 miles on it, you may want to have an attorney look over your paperwork.

It might sound morbid, but transfer-on-death registrations can be a real lifesaver for beneficiaries of old cars. These are special certificates of car ownership that list the name of the intended beneficiary of the vehicle in the event of the owner's death. These certificates waive the need for probate. Currently, they're available in just a few states; California, which has the largest number of registered autos, is among them. 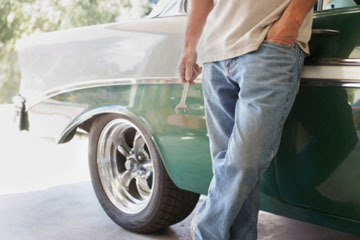 Do you know the actual value of that car? What if it's worth millions?
Nikolaevich/Getty Images

Probate is behind you, but you're not done with fees and paperwork yet. You've still got to take care of the taxes, tag and registration. To do that, assess the car you've inherited.

That may sound simple, and if you're the new owner of an '84 Bronco, you probably don't have much to worry about. But let's say you hit the inheritance jackpot and have been bequeathed a rare, much-sought-after car -- or even a rundown mass-produced classic. In these scenarios, it might be difficult to accurately estimate the value of the car.

Why is that so important? You'll need to know what the vehicle is worth in order to pay the proper taxes during the registration process. Since every automobile has a different value that's determined by condition and wear and tear, the overall worth of your inheritance could be substantially more (or less) than the Kelley Blue Book value or an estimate from Edmunds or the National Automobile Dealers Association (NADA). To play it safe, you may want to have a professional appraiser look the car over.

Once you've determined the value of the car, head on down to your local DMV to pay for your tag and registration fees. You probably won't be charged a sales tax (after all, you haven't bought anything), but, depending on where you're registering the vehicle, you may have to shell out for property or use tax.

And then, there's the much ballyhooed-about inheritance tax. You won't be bothered with this unless the vehicle is part of a sizable estate (one worth at least $1 million) or you're the deceased's spouse. Inheritance tax laws vary by state, but typically, "Class A" relatives (parents, children and grandchildren) won't pay as much as more distant relatives and unrelated acquaintances, such as friends and employees.

Inheritance tax won't be a problem for most of us, but if your favorite uncle left you the keys to his 1961 Ferrari 250 GT California, you'll understand all the fuss. You might suddenly owe Uncle Sam a million bucks or more, as the inheritance tax can claim more than 15 percent of the estimated value of your inheritance. Many states have begun reducing or even eliminating the inheritance tax, though there are many areas of the country where it still exists.

If you'd like to sell your car, you're free to do so as soon as you're through with the probate process. However, if the value of the vehicle has increased since you took ownership, you're headed for a collision with the capital gains tax. So, say for example, you inherited that 250 GT California back in 1983, and you're looking to sell it now. Even though you've owned the vehicle for the better part of three decades, you're going to have to pay taxes on its increased value. In this case, the tax would be substantial, as this little speedster became one of the most valuable cars in the world after Ferris Bueller took it for a spin on his "Day Off" in 1986 (this model can sell for $11 million or more!). Of course, you may be tempted to keep the sale a secret, but trust us, it's not a good idea. The IRS has a tendency to keep track of assets like that, and you don't want to pay interest and penalties on top of those pricey capital gains.

You've gone through probate, paid your taxes and now the car is legally yours. But what if you've inherited a real antique? Even well-cared for cars can show signs of age and wear, so first you have to determine if you're holding on to an out-of-tune classic or a pile of antiquated scrap.

Even if there's no chance the car will ever cruise down the open highway again, you can probably still make a profit on your inheritance. Spare parts for older autos have become a valuable commodity. However, the saying "they don't make 'em like they used to" often applies here, so you may be pleased to discover that your antique requires just a few days in the shop to run like new again.

If you're planning on restoring the car, you need to ask yourself a lot of options. Do you want to modernize the vehicle with a built-in GPS and a high-tech stereo, or would you prefer to cruise around with a box full of 8-tracks and an atlas in the trunk? Just remember that while the comforts of the modern era are great for daily drivers, serious car collectors prefer and will pay substantially more for vehicles containing all-original parts.

Regardless if you want to start by fixing up the cosmetic blemishes of your machine or rebuilding everything under the hood, it's probably going to take a while to get some of your parts. Parts are more readily available for mass-produced, still-popular older cars such as late-'50s Thunderbirds and mid-'60s Mustangs. Trying to find parts for something like a 1948 Tucker Torpedo is like doing repairs in the dark -- you'll be lucky to find something that fits, and even if you do, there's no guarantee it'll work.

When Your Car Is Older than Grandpa

If you've been bequeathed the kind of car that requires a crank to start, consider yourself lucky: Very few of these antiques have survived into the modern era. However, you may just want to keep it as a stationary conversation starter or sell it to a museum, as parts for some of these old jalopies are extremely rare and can be very expensive. Model-specific car clubs may be of some help, but do your restorations for the love of the car, not to make a profit (because you probably won't).

Men Tend to Relax More, Do Less, When Not Caring for the Kids
Bird-Watching Projects for Kids
How to Figure Out if You Can Afford Not to Go Back to Work after Maternity Leave