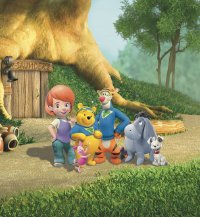 Copyright Disney. All Rights Reserved The characters are animated by computer generation in the series 'My Friends Tigger and Pooh,' premiering in spring 2007.

Winnie the Pooh and his friends have starred in several TV shows. The formats have ranged from animation to puppets to a new CG animated show, which starts in the spring of 2007. Download a complete episode guide to all of Winnie the Pooh's television shows, holiday specials, and movies here.

"Welcome to Pooh Corner" was a live-action/puppet television series that aired from 1983 to 1995 on the Disney Channel. The show featured Winnie the Pooh characters portrayed by human-size puppets, except for Roo, who was a traditional hand-puppet. Each show started with host Laurie Main narrating an episode, which then was acted out by the characters. This was followed by a music video of songs from the Winnie the Pooh movies. The last segment was an arts-and-crafts lesson taught by a Pooh cast member.

"The New Adventures of Winnie the Pooh"

"The New Adventures of Winnie the Pooh" was an animated television series that aired from 1988 to 1991 on ABC-TV. Reruns aired on ABC-TV until 2002 and on the Disney Channel until September of 2006 (presumably to make way for a new series, "My Friends Tigger & Pooh"). On the show, Pooh was joined by the regular cast and new characters: Christopher Robin's mother, Owl's cousin Dexter, Kessie the Bluebird, Junior Heffalump, Skippy the Sheepdog, Stan Woozle, and Heff Heffalump. Some episodes from this TV series have also been featured in films.

Jim Cummings, the voice of Pooh, recalls that this was his first Pooh gig. He attended an open call in which Disney was looking for a new voice for Pooh. Cummings also shared the voice of Tigger during the series with Paul Winchell, the original Pooh, who was often traveling. Cummings says, "I was also a Woozle and a few other extraneous characters."

"The Book of Pooh"

"The Book of Pooh" was a puppet show for preschoolers that aired in 2001 and 2002 on the Disney Channel. The puppets were filmed against cut-out style backgrounds, which gave the show a "pop-up book" look. This show departed from the original Pooh books and films, as it featured Tigger eating honey. (In previous Pooh stories, Tigger would say, "Tiggers don't like honey!") In addition, Tigger could bounce up and down from trees; previously, he could only bounce up into a tree.

Cummings (the voice of Pooh and Tigger) says the puppets were somewhat complicated. "It took four people to operate the Tigger puppet," he says. "It was Japanese Kabuki-style puppetry, beautifully done. We would record our voices, which were sent to New York City. Then the puppets would lip synch to our voices [as characters do in animation]. It was fully articulated, just riveting."

"My Friends Tigger & Pooh" is an interactive, learning-focused television series for preschoolers. It is scheduled for a spring 2007 premiere during the "Playhouse Disney" programming block on the Disney Channel. The series will present the Hundred Acre Wood in CG animation and introduce a new character, a six-year-old girl named Darby. She is a new friend for both Pooh and Tigger, and shares the personality traits of both.

Although Christopher Robin is not a main character in this series (neither is Owl), he does appear in storylines and interacts with Darby. She encourages Pooh and Tigger to be "super sleuths" and help her solve mysteries in the Hundred Acre Wood. Pooh and friends will help young viewers learn how to work with others, resist immediate gratification, and understand the value of patience and reasoning. "My Friends Tigger & Pooh" is produced to appeal to kids and parents alike.

Now that you know which films and TV shows Pooh and company have starred in, let's meet the real-life people behind the classic music and the memorable voices.