by Natalie Walker Whitlock
NEXT PAGE 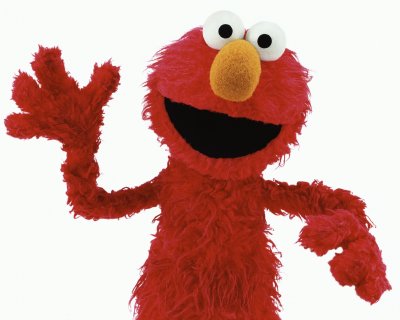 Elmo is the world's favorite furry red monster. In fact, Elmo is the most recognizable children's character in the United States, according to research from Marketing Evaluations, Inc.

For the past 21 years on the award-winning television show "Sesame Street," Elmo has been educating and entertaining fans worldwide. Both children and adults are smitten by his cute, googly eyes and his high-pitched laugh. Through singing, laughter, and educational play, Elmo encourages children to use their imaginations and helps them learn preschool fundamentals.

Elmo, his pet goldfish Dorothy, and their silly friend Mr. Noodle are the stars of "Elmo's World," one of "Sesame Street's" most popular segments. Elmo's adventures have been made into more than 50 "Elmo's World" episodes, numerous home videos, and a full-length feature movie. In this article, we'll take a look at all things Elmo, with a little help from Rosemarie Truglio, Ph.D., vice president of "Sesame Street" Education and Research.

The world's most recognizable puppet was once simply called "Baby Monster" and appeared without his signature high-pitched voice and contagious giggle. Baby Monster was used in several sketches on "Sesame Street" in the late 1970s and early 1980s, including the sketch "Near and Far," staring Kermit the Frog and Henry and Harvey Monster. Elmo also made a brief appearance in the storybook "The "Sesame Street" Circus of Opposites," published in 1981, but was colored dark orange instead of his usual red.

You may be surprised to learn that Elmo was put into storage for several years. Elmo got his big break when "Sesame Street" producers decided they wanted a red monster on the set. They liked the look of the Baby Monster puppet, but Hunt didn't want to perform it. Hunt asked Kevin Clash, then a Muppeteer-in-training, to take on the role.

According to Clash's biography, " My Life as a Furry Red Monster: What Being Elmo Has Taught Me About Life, Love and Laughing Out Loud," Hunt tossed him "a shapeless, soft bundle of red" and challenged him to come up with a voice for the Muppet.

"I'd used that falsetto voice in my characters before," Clash wrote. "When he gave me the puppet, I knew that was the voice."

Not long after Clash gave Elmo his distinctive falsetto voice and brought to the Muppet his cheerful, curious outlook on the world, Elmo became one of the most popular characters in the history of "Sesame Street."

For those behind in their Elmo trivia, Elmo is a never-aging three-and-a-half-year-old monster. Elmo lives on the third floor of the 123 Sesame Street apartment building with his mother Gladys, his father Louie Monster, and his baby sister Daisy. He loves to tap dance, ask questions, play with his friends Zoe and Grover, and care for Dorothy, his pet goldfish.

"Well, first of all, Kevin is an amazing puppeteer," said Truglio. "Beyond that, he's red, and although that is a simple thing, red attracts very young children. Same thing with the voice. Children really react well to Elmo's voice."

Elmo's age also resonates with preschoolers. "Children often gravitate to Muppets around their own age, who act like they do and are going through the same experiences they are. Elmo represents a preschooler, and much of our audience is made up of preschoolers," she said.

There are a couple other aspects that make Elmo so loveable. "It doesn't hurt that Elmo is also cute, cuddly, and funny," Truglio said.

The Man Behind the Muppet

The 45-year-old, six-foot-tall African-American with a slightly gruff voice seems to be an unlikely match for the tiny preschooler Elmo, but Kevin Clash's enthusiam for his furry red alter-ego is undeniable.

In "My Life as a Furry Red Monster," Clash talks about life with Elmo and explains his interesting beginnings in puppetry and children's television. Clash began building puppets at a very young age. Although he was teased for his unusual hobby, Clash's parents were supportive, providing him with materials and driving him to puppet shows. When Clash cut apart his father's good overcoat to create a puppet, his father reacted by asking, "What's it's name?"

After Clash was hired by Sesame Workshop, he tried his hand at a few different Muppets: a sportscaster, an elderly professor, and a juggler. These characters didn't really catch on, so Clash was free to take up the part of the little red monster.

Clash divulged an Elmo fact that fans might be surprised to learn: There are actually eight Elmo clones in the "Sesame Street" New York studio, each with different features and functions. To make Elmo as real as possible and to maintain the illusion for young viewers, Clash and the other Muppeteers rarely appear in public and virtually never on screen.

We know Elmo is one of the biggest stars on "Sesame Street." In the next section, we'll talk about how exactly Elmo fits into life on America's favorite street.