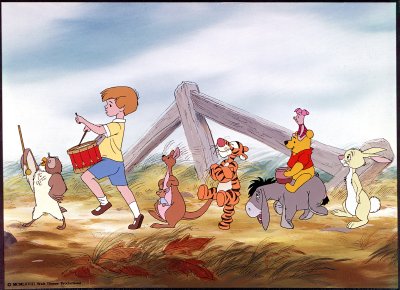 The characters of "Winnie the Pooh" are some of the most beloved in children's literature, family film, and TV. In this section, we'll look at the inhabitants of the Hundred Acre Wood and how they relate to each other.

Winnie the Pooh is a friendly bear who is always willing to lend a helping hand to his friends. Pooh loves honey (he spells it "hunny"), but his eternal search for it often gets him into trouble. When Pooh runs out of the sweet stuff, he'll ask to borrow a jar (or several) from a friend or try to taste some from a bee hive in the Hundred Acre Woods.

Christopher Robin is a young boy and the only human friend of Winnie the Pooh (and the gang). Christopher is the one whom Pooh and the other animals can always call on when they get into trouble and need help. Christopher lives at the other end of the Hundred Acre Wood and often calls Pooh a "silly old bear."

Piglet is a very small pig and a good friend of Winnie the Pooh. He has a constant fear of the dark and is very anxious about anything unknown. Whenever he gets scared, he is often heard exclaiming, "Ohhhh, dear!" Even though he is a "very small animal," Piglet will conquer his fears to help his friends.

Tigger is a hyperactive tiger who loves to bounce, because that's "what Tiggers do best." He is a favorite of everyone in the Hundred Acre Wood, except Rabbit, whom he drives crazy with his bouncing. Tigger loves to try new things with gusto, but he often realizes that these endeavors aren't as easy as he thought.

Rabbit is a cranky rabbit who is always concerned that someone, usually Tigger, is going to destroy his well-kept garden. Rabbit likes a very serene life with no surprises, but Tigger and Pooh bring him plenty. While he tends to be a curmudgeon, Rabbit is a big help to Kessie, a bluebird whom he found and nursed back to health.

Eeyore is a loveable, pessimistic, and gloomy donkey. Eeyore is hardly ever happy, but his grumpiness might come from the fact that his tail is pinned to his behind. Disaster regularly follows him; in fact, nearly all of Eeyore's houses have either: fallen down, been knocked down by floods, or have been bounced down by Tigger.

Owl is a wise old owl who tries to give useful advice, directions to far-away lands, and suggestions. Often, his words of wisdom backfire. He loves to read and is somewhat of a know-it-all. When Owl starts talking, he tends to go on and on; that's usually when Pooh and the other animals will quietly sneak away.

Copyright Disney. All Rights Reserved. Kanga mothers everyone -- even Piglet.

Kanga is a kangaroo and the mother of Roo. She also acts as a mother figure to the rest of the characters in the Hundred Acre Wood. Always helpful, Kanga comforts everyone and helps when they are feeling low. She often worries about Roo, especially when he goes off on adventures with his good friend Tigger.

Roo is a young kangaroo. He's Kanga's son and Tigger's best friend. Even though he knows better, little Roo constantly gets into trouble but always learns a lesson. He enjoys discovering the small wonders in life. Roo is nice and sympathetic, and he often expresses thoughts that make him sound older and wiser than his years.

Now that you have met all the characters, go to the next page to learn about Winnie the Pooh's film career. The character's first film appearances were in a series of small animated shorts (or featurettes). Pooh then graduated to full-length films and videos.