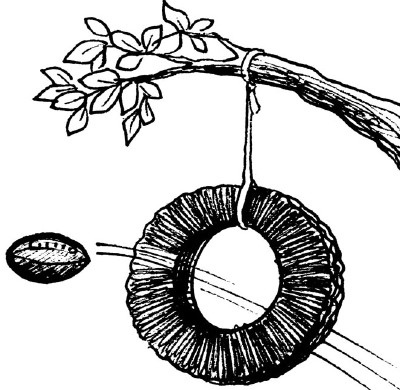 While many families are involved in organized sports, lots of kids enjoy something a little less structured. Get ideas for sports games for kids in this article.

Sometimes neighborhood kids get together spur of the moment to play and don't want to have to organize teams, gather equipment, etc. Other times the number of kids isn't right for a particular game, or sometimes a kid just wants to play by himself or herself.

There are lots of fun sports games for kids that don't require teams or involve lots of equipment. Some of the games below only required a piece of chalk or a rubber ball. Some of the games kids can do on their own or with a large group of other kids. The point is that these games are fun, adaptable to different kids, and skill-building -- kids will improve their throwing, catching, and kicking abilities with these games.

Follow the instructions below for easy yet interesting sports games that your kids will enjoy:

Batting balloons around is even more fun with paddles you make yourself. Learn more on this page.

Love to talk about sports? You'll love this sports crossword puzzle that you make up yourself -- and write right on the sidewalk. See how to play here.

Liven up your kickball game by using a tiny bouncy ball.

Fine-tune your throwing skills with this fun but not-so-easy game.

If you've got a crowd of eight and only one basketball, this is the game for you! Learn more here.

Practice and become a pro at all kinds of tricks with a bouncy ball. Find out more about this fun game.

Selecting the person to be "It" for a game can be as fun as the game itself! See more here.

Have fun practicing your kicking for soccer with this game. Play it with friends or on your own.

Kids will love this make-it-yourself active sports game for indoors or out! Learn more about Balloon Paddle Ball.

Make as many rackets as there are players. Carefully pull a coat hanger into a diamond shape with the hook at one corner. Bend the hook into a handle and cover with masking tape. Cut the foot off of an old nylon stocking. Tie the end shut with string. Slip the stocking over the hanger. Tie off around the handle and cut away the excess stocking.

The games below are great outdoor games for a windless day -- and are also great for the indoors, because they're easy on the furniture!

Keep it up: This is a cooperative game for two to four players. Define the boundaries that players must keep their feet inside, then toss a balloon in the air. Keep the balloon up, striking it only with the rackets.

For a different type of outdoor game, try the Sidewalk Sport Crossword on the next page. 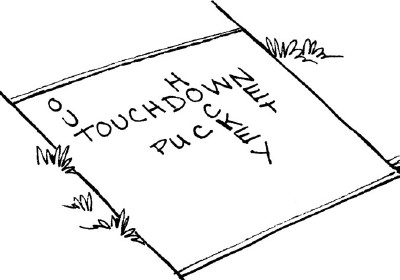 Do a Sidewalk Sports Crossword!
None

Line up a few sports terms just for fun. Do you know your sports jargon? The terms for your favorite games? Prove it with this fun sidewalk sports crossword.

The first player writes a sports term horizontally across the sidewalk in one color of chalk. The second must spell a second word, vertically, using one letter from the horizontal word and a different color of chalk.

The person with the most words after ten minutes wins. But remember, all of your words have to have something to do with well-known sports. You've got to know your "jock" vocabulary if you want to win this game.

Get a whole new kick out of a tiny soccer ball with this fun -- and tricky -- game for kids. Learn to play kickball bouncer.

Kickball gets a little tricky when the ball you kick and capture is quite small. Don't believe it? Try playing kickball with a tiny, brightly colored three-inch superball.

Kicking becomes an art. Covering your base takes a whole new kind of skill. Tagging your opposing team members out isn't nearly as easy as you might think (to avoid painful airborne outs, make sure all tags are done by hand).

See the next page for a different kind of ball game -- Tire Toss!

Accuracy counts in this tire toss game for kids.

Ready to improve your quarterback accuracy? Shoot for the big ring.

Suspend a tire tied to a rope from a secure tree branch or garage beam (make sure you get your parents' permission before hanging anything from any spot). Get help anchoring the tire at the bottom with something heavy, like a cinder block.

Now gather as many small plastic footballs as you can find, step back from the tire about ten paces, and start that rapid-fire passing action.

How many balls make it through the circular opening in the tire? The numbers may not be too good when you first start the exercise, but with practice, they'll get better and better. And so will your player-to-player passing accuracy.

For a variation on a popular basketball game, see Four-on-Four on the next page.

Play Four-on-Four with wide-open hoops. This is a fun variation on a popular sports game.

Four-on-four basketball tournaments are popping up all over America (the biggest, Hoopfest, happens in Spokane, Washington). Why not

try your hand at this fast, challenging version of b-ball?

Traditional rules apply. Tournaments use half-courts for a faster, tougher game. But you can play using a full court when you're just starting out.

See the next page to learn how to play Russia -- a game that doesn't need so many players!

It takes skill to work your way through Russia, this ball-bouncing game for kids!

In Russia, players throw, catch, and do stunts.

Mark a chalk line four feet from a high wall. Each player, standing behind the line, in turn throws the ball against the wall, does a stunt, and catches the ball. Anyone missing a level stays there until it is completed.

Onesies: Throw the ball at the wall and catch it before it hits ground.

Twosies: Throw the ball, let it bounce once between the line and the wall, and catch it. Repeat.

Foursies: Throw the ball, twirl your hands around each other four times, then catch the ball before it bounces. (Four times, and so on.)

Fivesies: Throw under one leg and catch it before it bounces.

Sixies: Throw the ball behind your back or over one shoulder and catch it before it bounces.

Sevensies: Throw the ball, turn, clap twice, turn again, and catch the ball before it bounces.

Ninesies: Throw the ball, spin around, and catch the ball before it hits the ground.

Tensies: Bounce the ball seven times on the ground, slap it off the wall with one hand, and catch it before it bounces. Can you do this one ten times?

For a good way to start out games where someone is "it," see the next page.

Have fun even before the game starts! When you're playing a sports game like tag or hide-and-seek, you need to spend a few minutes choosing "it."

To choose one, have every kid kneel in a circle, putting one foot into the center so they all touch at the toes in a smaller circle.

Do funny little rhymes like "One potato, two potato, three potato, four, five potato, six potato, seven potato, more!" as you touch a different player's foot, going in the circle, on each syllable. When you get to the word "more!," whoever's foot is touched is "it!"

Make up rhymes and silly songs of your own to help choose who becomes "it" next time.

On the next page, learn how to play Soccer Just for Kicks! 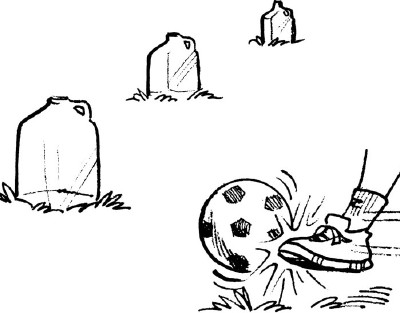 Play a game of Soccer Just for Kicks.
none

Knock down a few plastic players in this great sports game for kids. They'll have a lot of fun with Soccer Just for Kicks.

Line up six empty plastic milk bottles at the end of a field, roughly six feet apart. Now, move with your soccer ball from downfield and try to pick off the milk bottles one by one.

It's a great way to improve the accuracy of your kicks, even without teammates to help you score.