As children's games go, hopscotch is not only one of the oldest -- some say it dates back to the early Roman Empire -- but it's also one of the most popular. It's fun to play, doesn't require a lot of equipment, and is easy to learn, all of which makes it great for kids of all ages.

The following articles offer different versions of hopscotch and other hopping games. All you need is chalk for drawing the playing area and rocks or small stones to use as markers. The hardest part may be trying to decide which one to play. Have fun!

By the Numbers Hopscotch

This twist on traditional hopscotch mixes up the number sequence for hopping. See how to get started.

Here's all you need to know about playing hopscotch. Learn more about the basic rules.

Play these hopping games from different countries for a different kind of hopscotch. Find out how to play.

Why not start your hopscotch games with a variation on the old favorite? Learn more about playing "By the Numbers" hopscotch.

By the Numbers Hopscotch 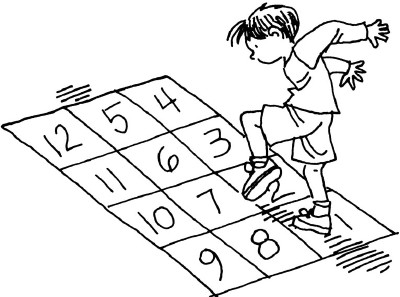 A "By the Numbers" hopscotch game is a fun variation on an old favorite. You don't need to toss a stone or use a marker for this version of hopscotch -- just keep hopping on one foot and try not to step on the wrong square. Think it's easy? Give it a try!

How to Play By the Numbers Hopscotch

Step 2: Number the squares 1 to 12. (You don't need to number them in any particular order, but do be sure that a number isn't more than 1 row away from the number that came before it.)

Each player's turn ends when he or she accidentally steps out of a square or lands out of sequence.

Does that seem too easy? Make it trickier for players by making them put their hands behind their backs and repeat the process.

Still too easy? Try jumping to only even-numbered or only odd-numbered squares.

Now, how about playing the game the traditional way? Keep reading to find out how to play hopscotch.

Hopscotch is played in some form all over the world, but the basics remain the same: Players hop through marked squares while trying not to fall and not to step on the wrong square.

A flat stone or small rock is used to mark the squares on which the player is not allowed to hop. This marker is sometimes called a puck, pottsie, or "scotch" -- see where the game gets its name?

How to Play Hopscotch

Step 1: Mark the court on a hard surface (like a sidewalk) with chalk. A line of squares should lead up to an end box. In some places, you can put two squares side by side. You can number the squares in order if you like.

Step 2: Toss the "scotch" into the first space. Jump over the space containing the scotch and continue hopping down the court.

Step 4: When you reach the end of the court, turn around and hop back. Losing your balance is a "miss" -- that means the player has to leave the court.

Step 5: If you complete the court without missing, step off the court. Then it's the next player's turn. When it's your turn again, pick up your scotch and toss it into the next square. Always hop over a square with a scotch in it. As more squares are taken up by scotches (as other players take their turns), the game becomes harder.

In some versions, players put both feet down to rest in any square that has their own scotch in it, but all other players must hop over that square.

Ready for more variations on the game? Keep reading to learn how kids play hopscotch or other hopping games in different countries.

If you like hopscotch, try these hopping games from different countries. Each one is a little different from the next, but you'll see that all of them use the basic idea of hopscotch.

Two games show how English kids and French kids play hopscotch; others have you capture the squares for a game of "Real Estate" or "Snail." Get ready, get set, get hopping!

How to Play "Real Estate"

Step 2: Each time a player successfully completes the court, he or she carefully tosses the marker over one shoulder. If it lands in a square of the court, the player chalks his or her initials in it.

Step 3: The marked square then belongs to that player, and all others must hop over it. The owner of the square uses it as a resting spot.

The winner is the player who "owns" the most squares.

How to Play English Hopscotch

Players hold their markers between their feet and hop like kangaroos from one large, numbered square to the next. Dropping the marker means the player loses a turn.

How to Play "Snail"

Snail is played on a round court with an inside space. Players take turns hopping on one foot from the first space to the center, marked "rest," then back out. Players then toss the marker to get a square, as in "Real Estate."

How to Play French Hopscotch

In China, hopscotch is called "gat fei gei," which translates to "airplane hopscotch." Keep reading to learn more about it.

"Gat Fei Gei" is Chinese for "airplane hopscotch." The hopscotch court is the same as for many traditional hopscotch games, but there's a tricky twist to this game -- you have to pick up your marker by bending backwards and reaching over your shoulder!

One you've mastered that, try to capture and own as many squares as you can. But watch out -- the other players will try to own your squares too. Here's how to get started:

How to Play Gat Fei Gei

Step 2: Next, each player stands one by one with toes against square one and tosses a marker at the pig's head. The player hops through the boxes and must retrieve the marker by reaching over one shoulder and bending backwards. Successful players claim square one with their initials.

Step 3: Now, players step and land on two feet only in their own squares. Any player forgetting this rule loses their squares, and other players then compete for them. If the court becomes impossible to play, other players may request a "safe" area in one corner of a chosen square. Only the owner may use the whole square.

Step 4: Once all squares are owned, the pig's head is divided in quarters and players compete for the sections.

ABOUT THE CONTRIBUTING WRITERS: