Weddings are by their very nature fraught with tradition, from the serious (swapping rings) to the playful (retrieving and tossing the garter belt). And at some point, couples decided to up the tradition of feeding the cake to each other by opting instead to smash the confection in each other's faces.

"Newlyweds typically feed each other the first slice of wedding cake as a symbol of their commitment to provide for one another," says Rachel Sylvester, associate Real Weddings editor with The Knot in an email. "However, the symbolism is often lost and replaced with the tradition of smashing cake in each other's faces."

This messy tradition is just the latest evolution of the wedding cake's role in nuptials. As far back as ancient Rome, the bride could expect to conclude the festivities by having a barley cake smashed upside her head. This dubious tradition was done to symbolize male dominance and encourage fertility, according to Renée Strauss, wedding expert and founder of WEDAWAYS.

"Crumbs would fall and the guests would rush in to scoop up what they could for their own good fortune and fertility," she explains in an email. "In the days of King Charles, II of England, icing was added and the modern wedding cake was born. This is when slicing the cake on the table became the practical way of sharing the slices."

It's tough to pinpoint when cake smashing began, but it has been around for several decades. The practice was lamented in a 2011 Dear Abby column, in which she referred to it as "demeaning to women" and referenced a 1987 book, "Curious Customs," which said it was a "comedic ritual that sustains masculine prerogatives in the very act of supposedly subverting them."

In other words, the groom is supposed to hold the bride's hand as she cuts the cake; she then attempts to feed him but smashes the cake in his face. The next step is to wipe off the goo "apologetically" which then "brings the play back to the beginning, as she is once again obedient to his wiser judgment," according to the book.

Most people are probably unaware of what the ritual is supposed to signify, seeing it either as a fun riff on the typical cake-cutting ceremony or else a silly custom that needs to go away.

"Like the bouquet and garter toss, cake smashing is a so-called 'tradition' that's been in decline," The Knot's Sylvester says. "This could be because more and more couples realize that it's not worth ruining a bespoke suit or covering your gown in blue buttercream simply for a dramatic photo op."

Cake smashing can actually be risky on other levels, as well. First, it's a waste of perfectly good cake, which checks in at anywhere between $1.50 and $12 per slice, depending on how elaborate it is. Cake smashing also comes with unsubstantiated, but rampant rumors that the practice is a predictor of future divorce.

Sometimes, it can even be downright painful, as evidenced by this video of a cake-smashing gone wrong.

Courtney Geigle, co-owner of the online wedding marketplace My Wed Style, and former wedding DJ, says most of the brides he's worked with don't like the cake smash. "Once the cake starts flying, there is no control over where it may fall, including on the white dress she's been trying so hard to keep spotless, her hair which took hours to style, or even her eyes," he emails. "I've even seen a bride lose a contact lens in battle. Let's just say the groom was lucky that she couldn't land her punches as accurately without it."

Despite the potential problems, lots of people defend cake smashing as a way to add humor to a celebratory occasion. "Some guests think it is disrespectful and demeaning, while others see the fun and excitement of it all," says DiCianni. "They can't wait for that last second to see what the couple will do. The suspense gets the guests every time. We love it either way because the smiles and laughter it brings is still what we want at the end of the day."

To ensure those smiles, both members of the bridal couple need to be on board with the ritual before it begins. "Overall, weddings should be a display of love and affection, not a battle for dominance over 'who takes the cake.'" says Geigle.

Now That's Huge
The world's largest wedding cake weighed in at 7.5 tons (6.818 metric tons), according to Guinness World Records. It was put on display in February 2004 at the Mohegan Sun Hotel and Casino in Connecticut, just in time for a bridal show. 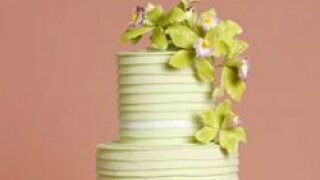 Wedding Cake PIctures from The Knot 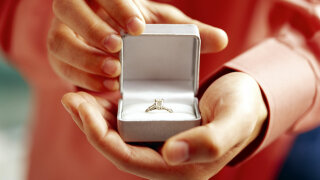 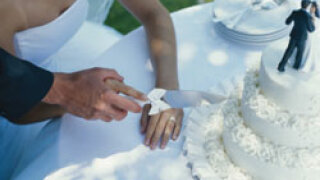 How Wine, Art and Diamonds Defy the Laws of Economics
January 22, 2020